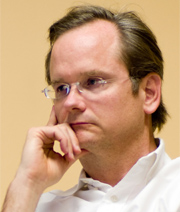 Lawrence Lessig is Professor of Law at Harvard Law School but is probably best known to readers for his work with Creative Commons, the Free Software Foundation and Electronic Frontier Foundation.

As a fair use advocate he seems a most unlikely adversary to quarrel with on those grounds. Nevertheless, that was exactly the path chosen by Australian music label Liberation Music in 2013.

The story began in June 2010 when Lessig delivered the keynote address at a Creative Commons conference in South Korea. The lecture, discussing cultural and technological innovation, included several clips from amateur music videos, some of them depicting people dancing to a song called “Lisztomania” by the band Phoenix.

The “Lisztomania” craze had developed when young people all around the world latched on to a video created by YouTube “avoidant consumer” and used the Internet and technology to develop and distribute their own derivatives. In his lecture, Lessig described the phenomenon as the latest iteration in the classic “call and response” tradition of communication.

In June 2013 Lessig’s video, which necessarily used snippets of the Lisztomania track, was uploaded to YouTube. On the last day of that month Lessig received a notice from YouTube warning him that the video had been blocked after it was deemed to contain content from Viacom. Liberation Music, the label behind the Phoenix track, then issued a DMCA notice and caused YouTube to shut down the video.

Lessig was subsequently warned by YouTube that further copyright breaches could lead to his account being closed down. In response Lessig submitted a counter-notice but was informed by Liberation Music that they would “commence legal proceedings in the United States District Court for the District of Massachusetts … for copyright infringement” if Lessig didn’t withdraw his notice.

While Lessig did retract his counter-notice, in August 2013 and with support from the EFF he sued Liberation Music, asserting his right to use the music clip under the fair use doctrine. Liberation acted in bad faith when it sent the takedown notice, Lessig’s lawsuit said, and “knowingly and materially” misrepresented Lessig’s video as infringing copyright.

Now, according to the EFF, Lessig has settled his dispute with Liberation after the label agreed to pay him damages and “fix” its copyright policies.

Liberation will pay Lessig an undisclosed sum for the damages it caused with the wrongful takedown. The money will go towards supporting the EFF’s work on open access and the label will also “adopt new policies” that respect fair use.

“Liberation Music will amend its copyright and YouTube policy to ensure that mistakes like this will not happen again. Liberation Music is committed to a new copyright policy that protects its valid copyright interests and respects fair use and dealing.”

When Liberation took on Lessig they clearly picked the wrong person, but the professor hopes that the label’s mistakes will help others understand that fair use has its place, but copyright abuse does not.

“Too often, copyright is used as an excuse to silence legitimate speech,” Lessig said in a statement.

“I’ve been fighting against that kind of abuse for many years, and I knew I had to stand up for fair use here as well. Hopefully this lawsuit and this settlement will send a message to copyright owners to adopt fair takedown practices — or face the consequences.”