While content distributed via BitTorrent is almost always free (a situation most users would like to keep intact) there has long been a desire to find a straightforward mechanism for optional donations.

The possibilities are intriguing, from artists being able to seed their own content to the public and getting paid directly by fans, to curators of already free content being rewarded for their distribution efforts.

In file-sharing circles there has been a traditional reliance upon PayPal transactions to show appreciation, but with the rise of alternative cryptocurrencies such as Bitcoin, new avenues have opened up. Many sites, The Pirate Bay included, accept donations in Bitcoin and Litecoin, and some artists have adopted the currencies for fans who want to chip-in.

Despite these developments there remains a disconnect between downloading content and a subsequent donation, meaning that split-second urges to hand over cash in appreciation often have time to cool. That, however, is about to change.

We’ll bring you comment from the FrostWire team in just a moment, but first let’s look at the simple process from the creator’s perspective.

After loading up FrostWire one simply goes about creating a .torrent file in the usual way, by selecting the tracking options and pointing it to the relevant content on the host computer. If the torrent creator would then like to give fans the option to donate, two extra screens appear.

The first allows the user to select an appropriate Creative Commons license under which to spread the content. 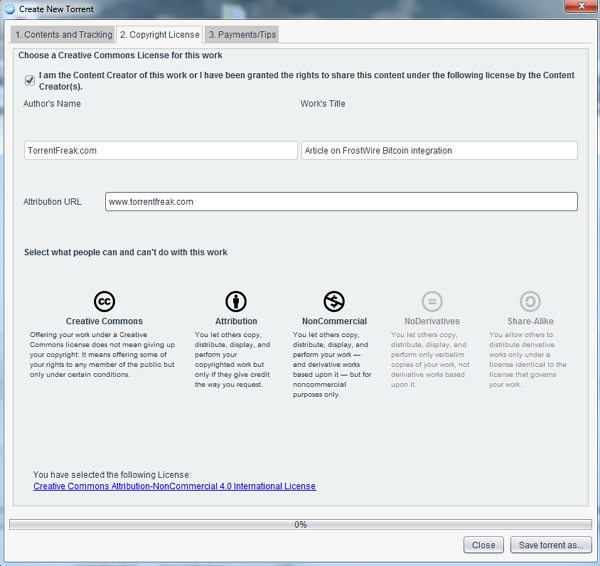 The next screen configures payment/tips/donation options, whether Bitcoin, Litecoin, Dogecoin, PayPal, or a mix-and-match between all four. 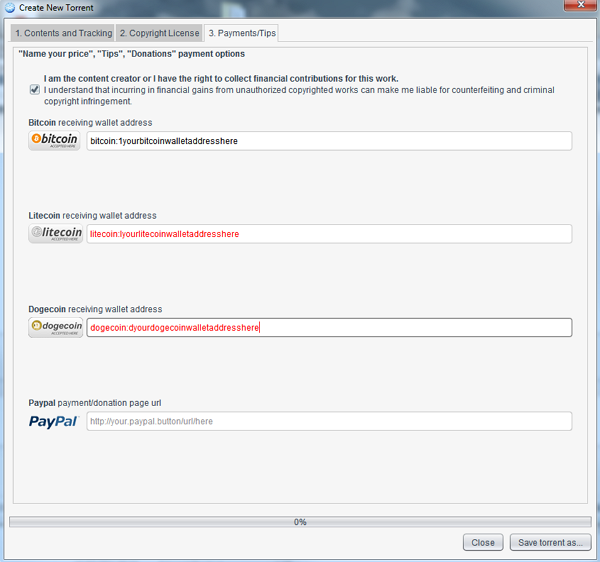 Obviously the creator/distributor will now need to seed, at least until plenty of other people download and start sharing the content.

For the downloader it’s simply a case of installing the correct version of FrostWire (this is a must at the moment until other clients implement the feature) and clicking on a donation-enabled .torrent file.

FrostWire have made a couple available for testing, one of which is a track by FriCtrl labeled Bitcoin_Revolution. Downloading that reveals a box next to the torrent title labeled “Tips/Donations”, with Bitcoin’s logo highlighted. Hovering over reveals the text shown below.

Once an option is clicked, FrostWire launches a payment process which opens a web page containing the target wallet’s cryptocurrency address in QR, hyperlink, and text form.

Of course, there will be those who immediately see possibilities for monetizing piracy. But, speaking with TorrentFreak, FrostWire’s Angel Leon says their objectives actually run counter to that.

“We believe piracy is best fought by giving consumers the options of getting legal content, and we want to build solutions that use this technology to empower content creators no matter how big or small they are. We want them to try BitTorrent as an alternative, an additional channel. We think it will be easier to convince more and more artists to join us with the new possibilities,” Leon told TF.

“Putting it bluntly, Bitcoin and BitTorrent integration give us the tools to create the P2P equivalents of iTunes and Netflix, which are centralized venues which work great for big content but not so much for the little guys who have to jump through many hoops to get in.”

Leon says that the end result could be a decentralized media store “owned by nobody and available to all,” one which allows consumers to deal directly with content creators “without the corporate interests, censorship issues and draconian rules that make it hard for the little guy to publish his work.”

The possibilities don’t always have to be commercial either.

“Just imagine a BitTorrent bundle powered by this technology in which Bono from U2 shares free songs or a free video documentary to raise awareness and collect Bitcoin donations for the (Red) foundation to further the fight against HIV worldwide,” the FrostWire team teases.

Further information, including the experimental builds and info on how to activate .torrent-enabled donations, can be found here.