Media Defender Buys P2P.net: Preparing for their Next Scam?

P2P.net (not P2Pnet.net) was up for auction at eBay earlier this year. Initially it wasn’t sold because the original owner wanted a higher price for the domain. It turns out that Media Defender was one of the interested parties, and they probably paid thousands of dollars to get the domain in their possession. Because of the huge amount of money that’s involved it is not likely that the domain will stay unused for a long time.

Last week we discovered that Media Defender actively tried to lure people into downloading blockbuster movies from their fake download site, Miivi.com. As expected, only a few hours after we made the news public the site was taken offline.

Media Defender later told Ars Technica that Miivi was an internal project to test out an online video project, but we know better. We’re convinced that they will try this, or a similar trick again in the near future.

Media Defender is hired by companies like the MPAA, BSA and RIAA to track down people who try to download copyrighted content. They record IP-addresses from BitTorrent trackers and other P2P networks. But they also utilize more proactive methods such as uploading fake .torrent files and setting up fake video download sites.

Luckily most BitTorrent site admins are aware of their shady practices and remove these fake files from their sites before they can do any harm. Pirate Bay admin Brokep offered his help to other BitTorrent admins to help them identifying and removing these fake files, he told TorrentFreak:

“Since the Miivi-incident we can’t keep quiet about them anymore. We want their employers to stop using them so they go bankrupt”

Update: Media Defender decided to redirect P2P.net to this article, thanks guys. 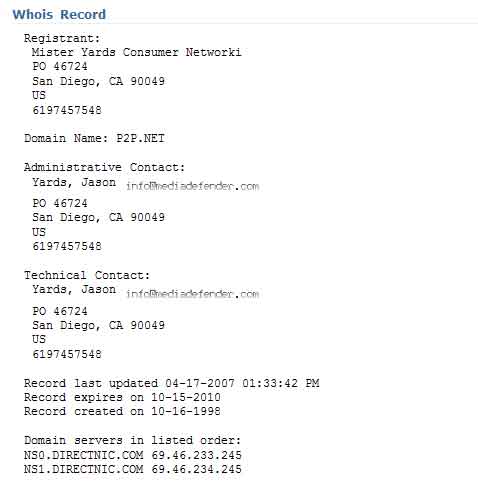