Megaupload Programmer Arrested in The U.S.

Since then the case hasn’t progressed much. Kim Dotcom’s extradition hearing has been delayed time and time again, while most of the recent court proceedings have dealt with how the seized assets should be handled.

However, during the weeks to come the case is likely to heat up again as U.S. authorities have just arrested Andrus Nomm, one of the indicted Megaupload defendants.

The 36-year-old programmer had been living in the Netherlands awaiting his extradition hearing, but was arrested in Alexandria, Virginia yesterday.

The unusual arrest after more than three years could suggest that Nomm made a deal to testify against Dotcom and his former colleagues.

That suspicion is confirmed by Megaupload lawyer Ira Rothken, who told the NZHerald that Nomm “either agreed to come to the US or is involved in some sort of deal.” 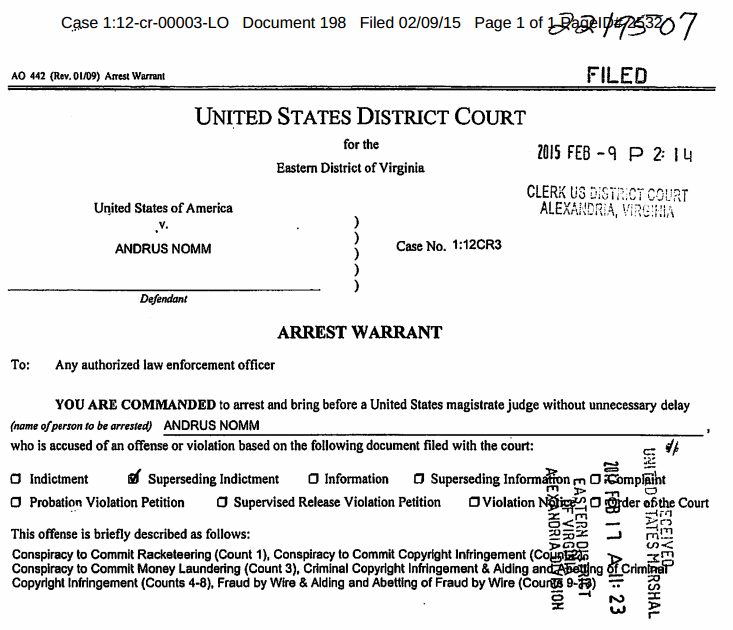 In the indictment Nomm is described as a software programmer and Head of the Development of Megaupload’s Software Division. In 2010 he received $100,000 for his work at the now defunct file-hosting service.

Nomm is also accused of watching at least one copy of a pirated TV-show.

“On or about December 5, 2008, NOMM sent VAN DER KOLK an e-mail, which included a screenshot of NOMM’s account using Megavideo.com to watch an infringing episode of the copyrighted television show Chuck,” the indictment reads.

Megaupload lawyer Ira Rothken believes that U.S. authorities might have taken of Nomm. As an Estonian citizen living in a foreign country he was vulnerable, and running out of funds.

“Unless the DOJ is taking advantage of him and his weak financial condition, which is possible, it is hard to fathom which copyrighted works they think Mr. Nomm criminally infringed,” Rothken tells TF.

If Mr. Nomm testifies truthfully including things like the Megaupload copyright neutral cloud technology and robust takedown policies it will likely help the defense,” he adds.

The U.S. authorities have yet to comment on the arrest and the possibility of a plea deal.