Microsoft Bans Halo 4 Pirates, and Some Idiots Absolutely Deserved It

Movies, music, software and games appearing online is nothing new, it’s been happening for many years and is not likely to stop anytime soon. The arguments over who is to blame and how it can be stopped have been countered hundreds of times, but still it occurs.

Despite the prophecy that piracy will stop development of movies, music and games, that never to come to pass either. Good products sell and in great numbers too – the massively successful Halo series from Microsoft is a testament to that, despite the piracy.

Late last week, and just about three weeks in advance of its official street date, Halo 4 leaked online and thousands of people downloaded the game. That’s nothing new – all previous games in the series appeared online too.

“We have seen the reports of Halo 4 content being propped around the web and are working closely with our security teams and law enforcement to address the situation,” said Microsoft spokesperson Joe DiMiero.

By the weekend it became clear what Microsoft’s response would be – an Xbox Live ban for those that foolishly connected their Xboxes to the Internet. 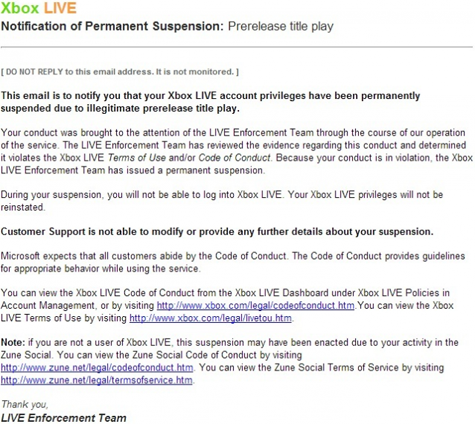 Anyone who has gone to the time, trouble and expense of modifying an Xbox, and then downloading a 16GB file should know all too well the risks involved and frankly it’s difficult to have any sympathy with them whatsoever. Piracy is a cat and mouse game and this time the mice got caught. It happens.

But worse still, in the last few days some pirates completely overstepped the mark, not by doing what they always do, but by attempting to ruin the game for everyone else. For the developers of Halo 4 and game lovers everywhere, that is completely unacceptable.

“There are people putting the whole thing on YouTube,” Frank O’Connor, Halo franchise director, told Polygon. “Microsoft is addressing that a single case at a time, it just takes a little while to handle.”

So OK, you’re saying, people just have to stay away from Halo 4 videos on YouTube and nothing will get spoiled. Well it’s not as easy that.

Some people who have pirated the game have been deliberately posting key-point spoilers wherever they can, from Xbox.com’s own forums and game discussion sites everywhere to social networks including Twitter and Facebook. It’s got to such a point that IGN have created a guide to help gamers avoid having Halo 4’s plot ruined by people who just want to mindlessly sabotage the enjoyment of others.

The vast majority of game buyers, game pirates, and the gray area dwellers who buy some and pirate some, detest this kind of behavior. Piracy won’t stop Microsoft making big money on Halo 4, that’s guaranteed, but now potential buyers can’t safely follow the online hype and discussions leading up to Halo 4’s release for fear that some clown will spoil the game.

You can’t easily put a price on beautiful story telling. Sadly, sabotaging that comes for free.