November 2009 was a pivotal time for the BitTorrent landscape. Just a week after The Pirate Bay decided to shut down its tracker for good, number one BitTorrent site Mininova threw in the towel after losing a court battle with the local anti-piracy outfit BREIN.

The torrent indexer was told by the court to remove all infringing torrent files from its index. This was technically unfeasible according to the Mininova team, who were left with no other choice than to remove all torrent files uploaded by regular users and restrict new uploads to verified accounts.

This move resulted in the deletion of more than a million torrents, many of which were not infringing any copyrights at all. As expected, the consequences of this decision for Mininova’s traffic, as well as the number of searches and downloads on the site, were disastrous.

Today, a year later, we take a look at the unprecedented impact the decision had on the website. Right before going ‘legal’, Mininova was believed to be the leading torrent site in terms of traffic, with a massive 5 million visits a day. Today, the site has a few hundred thousand visitors at most.

The decrease in daily downloads is even more pronounced, dropping from more than 10 million a day to just 250,752 yesterday. Similarly, the daily search volume has decreased from 10 million to 694,345 a day. These numbers are of course still higher than hundreds of other torrent sites. But Mininova is no longer part of the top 10 most visited torrent sites, a list it led for two years in a row. 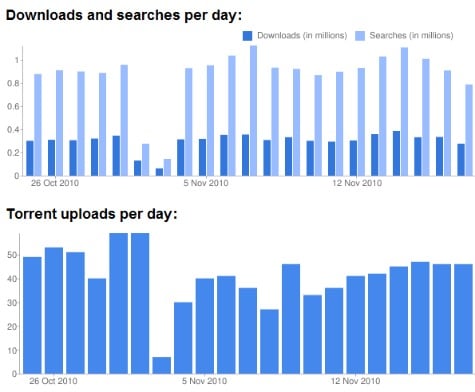 Content wise things have changed quite bit too. Previously, thousands of new torrents were uploaded by users daily, but in recent weeks the average number of newly submitted torrents is stuck at 35 a day. In total, Mininova now indexes just shy of 15,000 torrents, while most other torrent sites have several million active torrents, many of which ironically originated from Mininova.

On the other side, the searches compared to downloads also show that many people don’t seem to find what they are looking for on the site. A year ago the daily searches and downloads were both at 10 million, but today the searches are nearly three times as high as the downloads.

Although the unavoidable decision to limit new torrents to authorized publishers has had quite an impact on the site and its users, Mininova as a company still exists. Whatever their plans are for the future, the site’s founders are still owed credit for having inspired dozens of torrent sites that emerged in the last years.