In the early 2000s, the RIAA filed lawsuits against tens of thousands of alleged music pirates.

Millions of people flocked to alternatives such as KaZaA, Morpheus, Grokster, and eDonkey. Since regular education campaigns failed to curb this trend, the lawsuits were supported to alert the public that piracy is not without consequences.

Filing full-blown lawsuits can be an expensive exercise so the RIAA attempted to take a shortcut by applying for so-called DMCA subpoenas. Unlike regular subpoenas, these are not reviewed by a judge and only require a signature from the court clerk.

Internet providers were not happy with this trend and objected. They argued that DMCA subpoenas are only valid when an Internet service stores or links to the infringing content (such as YouTube, Twitter and Facebook), not when they merely pass on traffic.

Various courts have agreed with ISPs since and effectively banned the practice more than 15 years ago. If copyright holders want to go after alleged pirates, they have to file a complaint and request a regular subpoena.

This is well established and copyright holders who have gone after alleged BitTorrent pirates in recent years did so through proper channels. However, late last month the rightsholders of the movie “London Has Fallen” gave it another shot.

In a request at a Utah federal court, it requested the clerk to sign off on a DMCA subpoena identifying 33 alleged BitTorrent pirates on a Comcast connection.

The company in question, LHF Productions, is not unaware of how things are supposed to work. It has sued BitTorrent users through the regular ‘copyright troll’ scheme dozens of times in the past.

This time, however, it opted for the cheaper and easier DMCA subpoena route.

“[T]he Clerk should expeditiously issue and sign the proposed subpoena and return it to the undersigned for delivery to the service provider,” LHF’s attorney  Todd Zenger wrote in his request.

Perhaps the company hoped that the demand would slip through or that the court would have other reasons to approve it, but that was not the case. Last week, US District Court Judge David Nuffer denied the request.

The Judge clarified, once again, that Section 512(h) of the DMCA only allows for prelitigation subpoenas when the targeted Internet services actually host or link to the infringing content.

“LHF has not identified any material that Comcast should remove or disable, and there is no assertion that Comcast directly stores, caches, or provides links to infringing material,” the Judge writes. 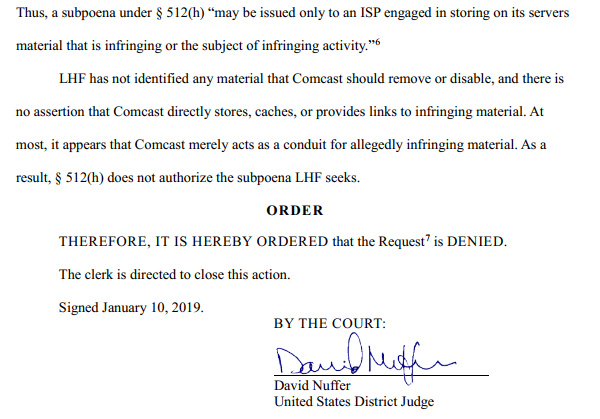 The film company is not the first to attempt to revive DMCA subpoenas for file-sharing cases. Anti-piracy outfit Rightscorp attempted to take the same shortcut five years ago and also failed.

LHF tried but probably knew already that their attempt had little chance of success. Whether the company will now file a regular complaint against the alleged pirates is unknown.