Every year hundreds of new torrent sites are launched, but only a few manage to rise to the top. Movies.io is one of these newcomers, and since it has something unique to offer it is likely to stick around.

The site can be best described as a movie torrent database with a beautiful design and the ability to create movie watch lists. The site itself doesn’t host any torrents, but lists magnet links instead. At the time of writing, the movies.io database contains 4317 movies and 13,534 magnet links.

When users search for a movie, they get a page with a large backdrop image and movie details such as the plot, genre and rating which is pulled from themoviedb.org. Logged in users also have the option to add movies to their watchlists and share these with others, or collaborate on them.

TorrentFreak got in touch with one of the founders, who we’ll call Jack, to find out more about the project. He told us that a precursor to the current site was actually a gift to his girlfriend.

“The initial motivation is actually kinda cute: my long-distance girlfriend and I love to watch movies together, but come the evening we can never remember which! For her birthday, one of my gifts was the precursor of Movies.io, basic but functional,” Jack told us.

But there was another driving force. Jack and his friends also find the current official options to download movies rather limited or overly complicated.

“Technology should be simple, and serve humanity. Content distribution is hard, not because we don’t have the tech for it, but because of legal concerns. Matthew Inman of The Oatmeal has a hilarious comic on trying to watch Game of Thrones legally: unfortunately, this experience is far from isolated.”

“The internet is of legal drinking age, yet we are stuck with a slew of poorly designed, incompatible, proprietary, flawed, restrictive solutions for watching and downloading multimedia content legally. BitTorrent is fascinating because it takes advantage of the distributed nature of the internet to share content efficiently between thousands of peers.”

Eventually, and after two weeks of coding, Movies.io was born and ready to be shown to the public. According to Jack the site is made by and for movie enthousiasts. A no-nonsense site that is unspoiled by ads, and one that’s intuitive and efficient to use.

“I think the service is unique in the way that it combines an open movie database, a good torrent search engine, and a very pure user interface. We give you a way to discover new movies and make collections of them, that’s it,” Jack told us.

“In a way, our love for movies shows through the design and general experience of the website. Some movies are pieces of art, and they deserve to be treated as such. The content is given a central place, through gorgeous full-screen backdrops, high-resolution covers, and plot. We don’t feature trailers, as they usually spoil a good movie, trying to wow people rather than ease into the ambiance.” 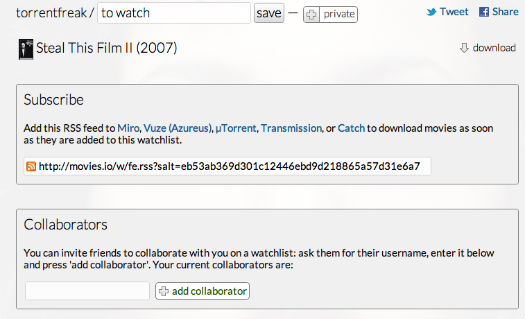 But there’s always the legal side of things. While Movies.io has plenty of legal content on the site, it also links to Hollywood blockbusters. This means that it will be a prime target for the MPAA, who believe that torrent search engines are facilitating content theft.

Jack and his friends are aware of the legal threats they could run into, but believe they have little to worry about.

“We are prepared for them, but then again, there is not much legal ground to stand on for potential takedown requests: we don’t host any copyrighted material on the website. We don’t even store torrent files, we just have magnet links, like The Pirate Bay,” Jack told us.

“The legal demise of Movies.io would be a sad turn of event. That said, as lunatic as they were, the TPB founders had one thing right: sink one ship, ten others will replace it. Content distributors are fighting against a wave bigger than them: in a way, they have already lost.”

According to Jack, content creators should embrace BitTorrent and other novel distribution methods, and they encourage movie makers to get in touch.

“We think there is a win-win scenario possible for content creators on such a platform: see the recent success of Louis CK’s $5 sale. While still too rare, it shows that there is definitely something waiting to happen. TPB has its Promo Bay, and we could very well launch something similar. If you are an independent content creator and would like to discuss your options, don’t hesitate to drop us a mail,” Jack concludes.