There are many strategies for disrupting the activities of pirate sites and services. Blocking, for example, leaves sites intact but aims to prevent users from visiting platforms so easily.

This presents a window of opportunity for pirates who through VPNs, proxies and mirror platforms, can still access the sites in question. A much more permanent option is shutting services down completely, a tactic currently being deployed by the Motion Picture Association and global anti-piracy coalition ACE, the Alliance For Creativity and Entertainment.

While details are hammered out behind the scenes, ACE – which is headed up by the studios of the MPA plus Netflix and Amazon – reaches agreements with site operators to shut down their operations. This can sometimes involve a cash settlement (such as in the Openload case) but the most visible sign is the handing over of domain names to the MPA, to prevent any resurrection.

This appears to have been the plan behind the recent closure of Nites.tv, a polished streaming and torrent platform that rapidly grew in popularity over the past several months. In April, following an announcement that it was shutting down to protect copyrights, Nites.tv disappeared and its domain was eventually taken over by the MPA. However, that wasn’t the end of the matter.

This week, an almost perfect clone of Nites.tv reappeared under a new domain, Nites.is. It has all of the features of the old site with identical functionality, suggesting that the ACE action to shutter the original site had been seriously undermined. Who is behind this reincarnation isn’t known but several major Hollywood studios are now trying to find out.

“The purpose for which this subpoena is sought is to obtain the identities of the individuals assigned to these websites who have exploited ACE Members’ exclusive rights in their copyrighted motion pictures without their authorization,” the application reads.

“This information will only be used for the purposes of protecting the rights granted to ACE Members, the motion picture copyright owners, under Title II of the Digital Millennium Copyright Act.” 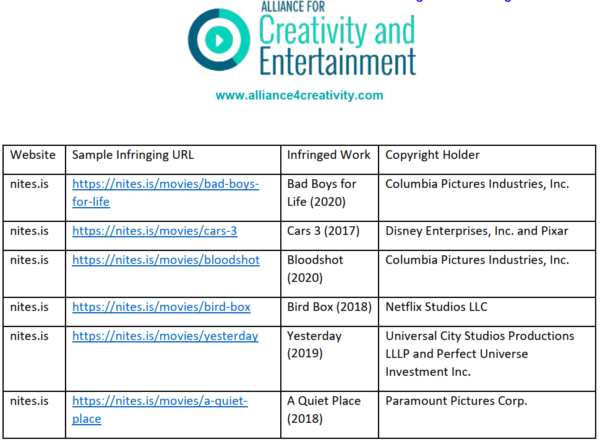 The companies, all members of ACE and represented by the MPA, request an order that would compel Cloudflare to hand over the personal details of the entities behind Nites.is. That information, according to the MPA, should include names, physical addresses, IP addresses, telephone numbers, email addresses, payment information, account updates and account histories.

What happens next is dependent on a few factors, starting with the information held by Cloudflare. Presuming the subpoena is granted, the big question is whether the CDN company has any useful information to hand over to the MPA. If it doesn’t, the trail could go cold, at least for now. If Cloudflare does have pertinent details, however, then the people behind Nites.is can expect a follow-up from the MPA.

The big question is whether those people, whoever they might be, are the same people as those behind Nites.tv. If they are (and presuming a settlement agreement was signed with the MPA/ACE to shut down permanently), then it will be a question of whether MPA/ACE are open to another settlement or in light of any breach, feel inclined to take the matter further.

ACE does not respond to requests to comment on any ongoing cases so at least for now, it will be a waiting game to see how this plays out.

Update May 18: Nites.is is no longer online

The DMCA subpoena application documents can be found here (1,2,3)