MPAA Complained So We Seized Your Funds, PayPal Says

For several years PayPal has been trying to limit how much business it does with sites involved with copyright infringement. Unsurprisingly torrent sites are high up on the payment processors “do not touch” list.

For that reason it is quite rare to see PayPal offered as a donation method on the majority of public sites as these are spotted quite quickly and often shut down. It’s unclear whether PayPal does its own ‘scouting’ but the company is known to act upon complaints from copyright holders as part of the developing global “Follow the Money” anti-piracy strategy.

This week Andrew Sampson, the software developer behind new torrent search engine ‘Strike‘, discovered that when you have powerful enemies, bad things can happen.

With no advertising on the site, Sampson added his personal PayPal account in case anyone wanted to donate. Quickly coming to the conclusion that was probably a bad idea, Sampson removed the button and carried on as before. One month later PayPal contacted him with bad news.

“We are contacting you as we have received a report that your website https://getstrike.net is currently infringing upon the intellectual property of Motion Picture Association of America, Inc.,” PayPal began. 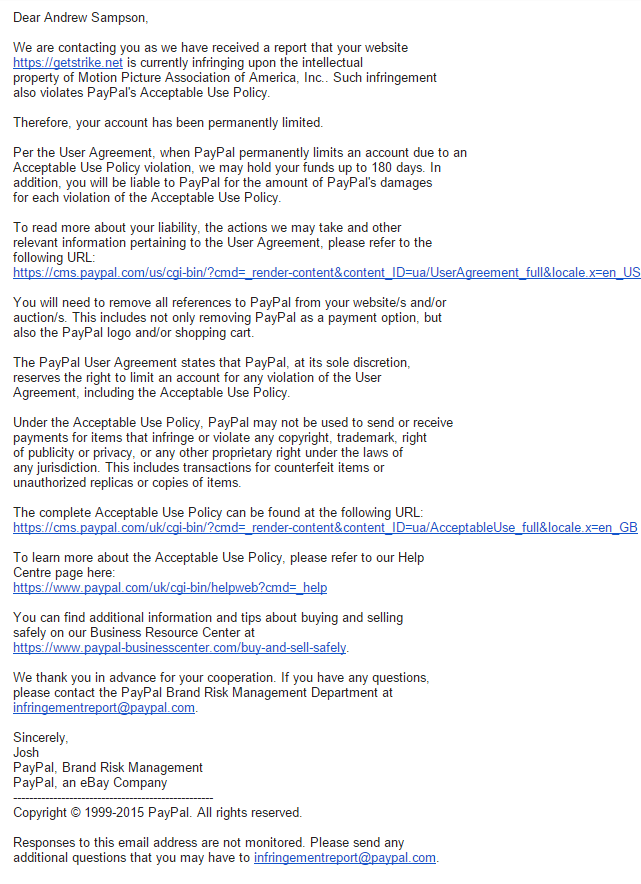 It isn’t clear why PayPal waited for a month after donations were removed from Strike to close Sampson’s six-year-old account but the coder believes that his public profile (he doesn’t hide his real identity) may have led to his issues.

“It seems someone at the MPAA realized I took donations using PayPal from some of my other LEGAL open source projects (like https://github.com/Codeusa/Borderless-Gaming) and was able to get the email of my account,” the dev told TF.

While Sampson had regularly been receiving donations from users of his other open source projects, he says he only received $200 from users of Strike, a small proportion of the $2,500 in his personal account when PayPal shut it down.

“That money was earned through legitimate freelance work and was going to be used specifically for my rent/car payment so it kind of sucks,” he says.

While it’s going to be a painful 180 day wait for Sampson to get his money back from PayPal, the lack of options for receiving donations on his other projects could prove the most damaging moving forward. Sampson does accept Bitcoin, but it’s nowhere near as user-friendly as PayPal.

Of course, this is all part of the MPAA’s strategy. By making sites like Strike difficult to run, they hope that developers like Sampson will reconsider their positions and move on. And in this case they might just achieve their aims.

“I’ve allowed someone else to manage the site for the time being. It will operate as it normally does but I need a bit to clear my head and don’t want anything to do with it as it’s become quite stressful,” Sampson says.

“I think the MPAA is playing low ball tactics against a developer who just wanted a better search engine. I don’t condone piracy, but I sure as hell understand why it happens.”