In its quest to stamp out piracy, the MPAA continues to pump money into its lobbying activities hoping to sway lawmakers in its direction.

While the lobbying talks take place behind closed doors, quarterly lobbying reports provide some insight into the items on the agenda.

The MPAA’s most recent lobbying disclosure form (pdf) has added several new topics that weren’t on the agenda last quarter. Among other issues, the movie group lobbied the U.S. Senate and the U.S. House of Representatives on Internet tax, net neutrality and online service provider liability.

TorrentFreak contacted the MPAA hoping to get some additional information on Hollywood’s stance on these topics, but a week has passed and we have yet to receive a reply.

The only thing we know for sure is what Hollywood is lobbying on, but it doesn’t take much imagination to take an educated guess on the why part.

Net neutrality for example. While the MPAA hasn’t got involved publicly in the recent net neutrality discussions, it clearly has something to tell to lawmakers. The Hollywood group most likely wants to assure that its anti-piracy efforts aren’t hindered by future legislation.

Previously the MPAA has warned that net neutrality could make it hard to use deep packet inspection, filtering and fingerprinting techniques to prevent piracy. This concern was partially addressed by FCC’s proposal which doesn’t include “unlawful traffic” under the net neutrality proposals. 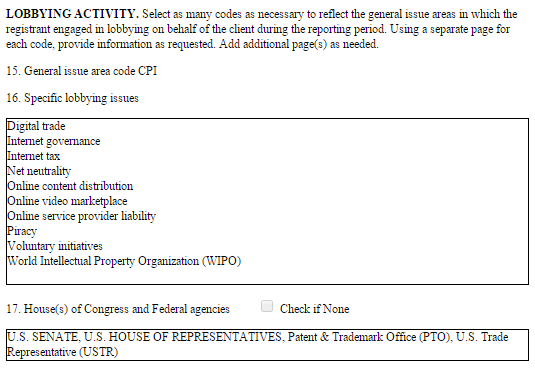 The Internet tax mention is perhaps most the controversial topic. There were massive protests in Hungary this week after the Government announced it would charge a tax of 62 cents per gigabyte on all Internet traffic. For now the Hungarian plan has been shelved, but an Internet tax remains an option for the future.

In the U.S. there has been a ban on Internet Tax for more than a decade, but that expires this year. There’s currently a bill pending in the Senate that extends the ban, but this has yet to be approved. It seems likely that the MPAA has weighed in on this proposal.

Finally, the MPAA also lobbied on liability of online service providers. This presumably relates to the possible revision of the DMCA, where Hollywood wants to ensure that online services can’t leave widespread piracy unaddressed.

Ideally, the movie studios would like to make it harder for sites and services to hide behind the DMCA, as the MPAA also made clear in its lawsuits against isoHunt and Hotfile.

While we may never know what the MPAA’s exact positions are on these topics, we do know that they are trying to steer lawmakers in their direction. Perhaps future legislative proposals and discussions may reveal more details.