In the modern age almost anything can be copied. Digital technology allows for the reproduction of audio, still and moving images, and even physical items are easily cloned using 3D printing techniques.

This ease of copying has provoked legal aggression and endless debate as to the purpose of copyright law and its role in protecting the interests of artists. In particular, entertainment industry companies often declare that no matter what its nature, infringement negatively affects those creators. But is that always the case?

A new project developed by Dr Robert Hovden at Cornell University aims to provoke discussion on that very topic by pushing replication of content – and indeed the law – to their absolute limits.

A self-confessed gradeschool downloader and former undergraduate at Jet Propulsion Labs, NASA, Hovden went on to study nanoscience at Cornell. His passion for studying the world at the tiniest possible levels has given birth to “When Art Exceeds Perception”.

The project, which will be exhibiting at Cornell University this November and December, explores the implications of copyright infringement, replication and plagiarism when the ‘pirated’ works are so tiny they cannot be perceived by human senses.

The Focused Ion Beam device used to ‘pirate’ the artwork 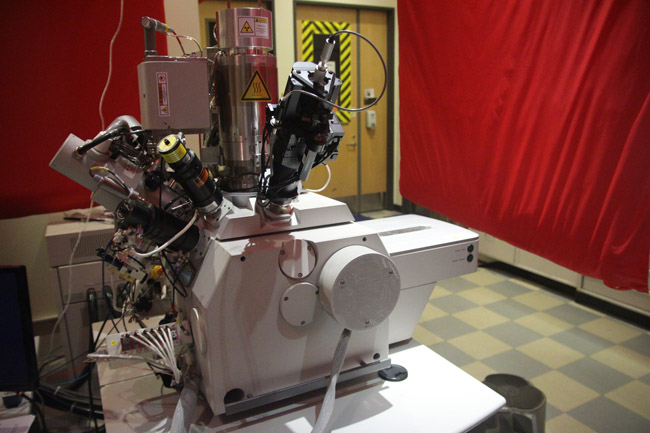 “To take a piece of art, copy it, and share it with the world without the original artists’ permission is traditionally viewed as wrong and, in most cases, violates copyright laws,” Hovden says.

“Such laws are intended to protect an artist’s financial interests and
provide incentive to create. However, in a digital era where information is encrypted and stored in the atomic bits of nanoscale devices, answers to philosophical, moral, and legal questions surrounding copyright become muddled.”

This leads to Hovden’s big question: When a copyright work is copied, framed and presented for public consumption on a nanoscale as it will during November and December at Cornell, has something been taken from the original artist?

“Thus far, people have discussed this project from a science or art perspective, but I believe that the readers of TorrentFreak are best equipped to understand this work. The exhibition is highly conceptual – completely beyond perception – and critical of current views on replication,” Hovden told TF.

Project creative assistant Michael Blaney informs us that the artworks involved are The Treachery of Images by René Magritte, Le Platane by Henri Matisse, M.C. Escher’s Regular Division Of The Plane With Birds and Laylah K. by Joy Garnett.

“The replicated pieces chosen are from recent, famous artists where copyright is relevant to the discussion,” Hovden says.

“Joy Garnett is a fantastic creator and one of a few fine artists who release work under a Creative Commons license. She sometimes paints from the photographs of others to make something uniquely new – a benefit of a free culture society. The nanoscale replica of Garnett’s work is the only one which I retained a low resolution micrograph image of.

“The Escher is a lovely tessellation with symmetries that can be found in the crystalline silicon substrate on which it was etched and Magritte’s ‘The Treachery of Images’ was chosen for a technological modernization and extension of his original concept. The Matisse is a best-selling serigraph at MOMA.”

The works of art, on a nanoscale 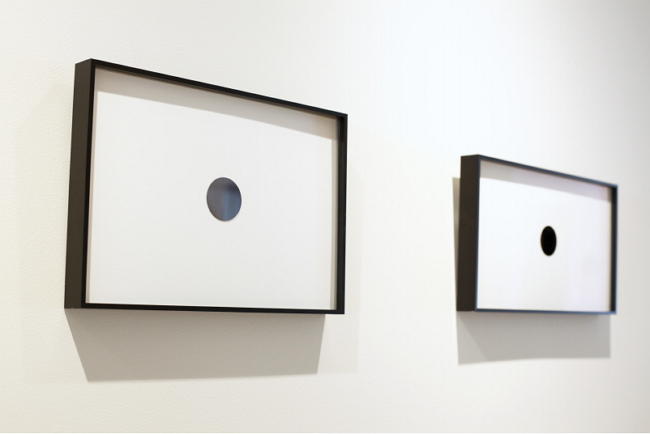 The concept of infringement at an imperceptible level is an intriguing one. Are artists affected by ‘pirate’ music that’s too quiet to be heard or by entire movies played in a fraction of a second, for example?

“I think your idea of an audio performance of ‘pirate’ music is in the same vein as this exhibition, but raises some new concepts,” Hovden told TF.

“The audio is quiet, with a signal to noise ratio that changes with distance. Maybe a microphone could record the sounds we can’t hear at close distances but the sound quality will drop with distance (actually, rapidly with the square of the distance). There will be a point where even a microphone cannot ‘hear’ the sound and the information is lost.

“So, does the extent of a public performance change? If a thousand people are present, but none – or only a couple – can hear it, is it a public performance? Also, you could play with the idea of translating the music to frequencies higher than the human ear can hear. It is loud, but not perceived – maybe by an animal.”

And the complexities and fascination of Hovden’s project only intensifies when one realizes that we’re all engaged in pirating on a nanoscale, quite possibly at this very moment.

“With the modern computer, most of us are continually replicating information – often without permission – in the nanoscale bits of our hard drives and memory. Not only small, the information is encoded in complex arrays.

“Here, I wanted to make something that is a direct representation of the original artwork – just like the low-amplitude ‘pirate’ music performance. The verdict is still out on how this type of work will be received (tolerated),” he concludes.

Those interested in experiencing When Art Exceeds Perception can do so at the Jill Stuart Gallery at Cornell University during November and December.