While TorrentFreak is naturally a site that reports on file-sharing issues and software, sometimes a new product will come along that involves no sharing at all and is simply too impressive to ignore. Just pure, unadulterated music downloading.

This particular application, called Mulve, comes in a package of just 2mb and once unzipped reveals two files, the installer itself and a text file on how to donate to the project.

Of course, people tend to panic that this type of software may contain some sort of virus or malware, but Mulve seems to be clean. The results of 43 virus scanners show that only two feel that the file may be suspicious, which seems to suggest a false positive on their behalf. For the purposes of a review, we’ll take a chance….

So what is Mulve? Here are its creators describing their product:

Originating from computer adept backgrounds, two guys, both musicians, met one day. After a drink, it was final, they decided to start developing a program like no other, something that would allow people to find a tune they wanted, no slower than a click of a button.

Mulve, is just that program. After years of development we wanted to bring you something that you would enjoy loading up, something that was not for personal gain or for money. Something that could run flawlessly without so much as a momentary hiccup. Something that would prove to be a monumental breakthrough in terms of music discovery.

Big claims like these are hard to live up to, but we’ve tested Mulve and it delivers – with style.

The software requires no further installation once unpacked and runs directly from the 1.9mb .exe file. Once running the user simply enters a search – below we’ve shown a couple of the results available for songs by Dan Bull of ‘Dear Lily’ and ‘Dear Mandy’ fame (because he’s a cool guy and a friend of ours).

Rest assured though, searches for just about any song brings up a wealth of results and in many cases lead to high quality MP3s, right up to 320kbs. 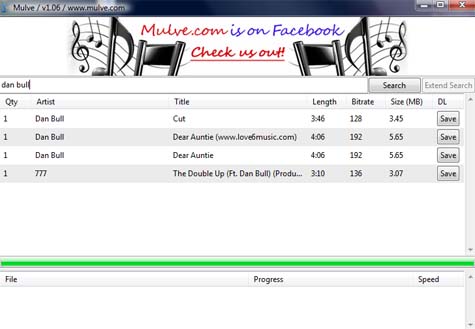 Download speeds are very impressive too. There’s hardly any time to max out your connection with a download since transfers are over so quickly. It doesn’t really get much better than that.

So what’s the deal here, from a file-sharing perspective?

Well, Mulve is not a shared-folder type application like LimeWire and it isn’t based around BitTorrent. It isn’t a Google-search type application pulling MP3s off open directories on websites either. In fact, there is absolutely no sharing at all and files seem to come straight from servers designed for the job.

This means that users downloading with Mulve cannot be tracked by anti-P2P companies since they are doing no uploading. If it continues, a nightmare scenario for the music industry.

Too good to be true? At this stage it’s hard to tell. However, FileShareFreak has been in touch with the creators of Mulve and asked them where their application is pulling music from – here is their response:

Without giving too much away, I can tell you that we are obviously not a P2P client and in fact we don’t search open FTPs. Instead we directly connect to a few other servers overseas which store the music. Unfortunately, I cannot reveal which these are.

Earlier, TorrentFreak carried out some tests of our own using Wireshark on half a dozen randomly selected tracks. On those it appeared that the music was coming from Russian servers connected to Vkontakte, a huge social networking site.

Other music could originate from elsewhere but with an alleged 10 million tracks to test, it could be a big task to find out.

Mulve appears to be operating on a donate basis at the moment and currently has a target of just $500. It is also selling advertising space.

The program itself looks very basic but when getting music becomes this easy, will anyone care? Probably not.

Nevertheless, Mulve really does seem to be too good to be true and with that in mind, we’re still watching with caution. Let’s see what it turns into in future – if it has one.

Mulve can be obtained here.