Last month, what first appeared to be a relatively new music downloading application burst onto the scene. Mulve carried no music of its own, but instead allowed users to make their own searches and download material from servers owned by Russia’s biggest social networking site, Vkontakte.

Although it had been around for a few months, this ‘second coming’ of Mulve was very well received and it was covered by dozens of news outlets. Last week, however, things turned sour. TorrentFreak learned that police in the UK had arrested an individual in connection with the application and it was made very clear to us immediately – Mulve would never, ever be coming back.

Clearly someone had put the fear of God into those behind the software. We can now reveal exactly where that fear came from. In common with the case against OiNK admin Alan Ellis, the arrest was made not on copyright issues, but on grounds of Conspiracy to Defraud.

After the case against Ellis ended in complete failure, the police – who had undoubtedly been prompted into action by the Big Four record labels – had unbelievably chosen to go with the same accusation against Mulve. But, as we will read, on even more tenuous grounds.

To understand exactly how fragile the accusations are, TorrentFreak has been speaking with ‘ms3arch’, a programmer who wrote a very interesting piece of code two years ago. The relevance of this open source work will soon become clear.

“In 2008, I found out that Vkontakte had this huge database of music, and that most Internet-savvy Russians no longer download music, they just stream using Vkontakte,” ms3arch told TorrentFreak.

“I did not like the interface of Vkontakte. It was too simplistic for me. So I created a different interface to it. At first it was single-threaded and really slow, but then I evolved it.”

Up until this year, the code created by ms3arch had a hardcoded login and password for Vkontakte (VK). However, once logged in it acquired a cookie from VK which actually didn’t expire for a year, so all further access to the site could be achieved by using that cookie.

When operating the software, users could carry out a search which went off in the form of an HTTP request to VK’s on-site search. The results that it returned were sent back to the software and displayed for the user. Further code enabled the software to work out the bitrate of the track and a link where it can be found on VK.

Then in 2010, ms3arch’s code was rebranded and Mulve was born.

Along with this change came a modification to the code. Every VK account has a limit on the amount of music that can be searched for, so rather than having a single hard-coded user account buried inside the application, a server was set up containing the login details for around 1,000 previously acquired VK accounts.

“So basically, the Mulve client connected to the central server and fetched login details from it,” ms3arch explained.

“If any login was invalid, and the client could not log in using those details, it told the server and received a new login. After 15 reports the account was blacklisted and taken out of the loop. However, if before those 15 tries accumulated another client was able to login with the same details, then the re-try count was reset, making the system abuse-resistant.”

So at this point, let’s just recap a few key facts.

1) Mulve nor its almost identical predecessor ever hosted in any music
2) All music is hosted by Vkontakte and is freely available to any member
3) Mulve is not a search engine, it is merely an alternative interface for VK’s search
4) Mulve never sees the searches carried out by users, they go direct to VK
5) Mulve nor its predecessor was ever promoted for infringing uses

And yet the police, almost certainly prompted by the BPI with the backing of IFPI, went on to arrest a man in the UK last week (we will call him John for the moment) on suspicion of Conspiracy to Defraud.

“I am the sole author of the program. John has never even seen the source code, neither does he know how to program,” ms3arch told TorrentFreak. “The reason they went for John was because the domain was in his name for 1 day.”

Ms3arch told us that he had considered telling this story using his real name, but decided against it – for now at least.

“Instead, I decided to add a cryptic entry to Facebook (if you look at the last one, you will see a SHA1 hash there at the end). Only I know how [to access] that cryptic entry, and if I ever need to use the ‘fame’ received from Mulve, I can.”

So what, if anything, is John guilty of? Well it seems that he made the tutorial video and registered the Mulve domain name to show a piece of software that isn’t even a search engine, but merely an alternative interface for one aspect of one of the world’s biggest social networking sites.

John, who is understandably extremely upset, told TorrentFreak that Mulve had hoped to partner with Thumbplay and use the app’s popularity to help new artists get discovered.

Instead, John faces charges of Conspiracy to Defraud and that dream lies in shreds.

Did the BPI, IFPI and the police learn anything after filing exactly the same charges against Alan Ellis of OiNK and failing miserably? Can they not see that this case is hugely weaker? Mulve isn’t even a search engine, it’s an interface for a search engine!

Let’s just hope that the Crown Prosecution Service, who will decide whether to take this case to court, will see some sense.

If the music industry had left Mulve alone, with zero marketing budget the app would’ve probably bounced along largely under the mainstream radar, but instead they have succeeded in attracting even more attention it to. The outcome is predictable.

Today, FileShareFreak brings news that Mulve has been resurrected in at least two different ways. 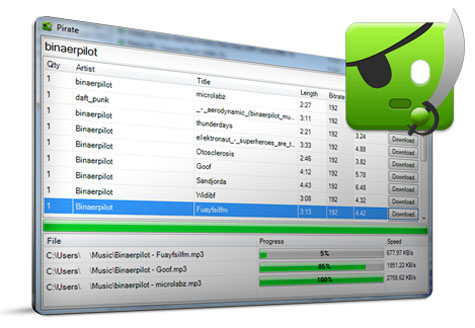 We haven’t tested PirateApp or Mulve Phoenix, but something we have been playing with is a rather handy plug in for Firefox.

After installing the VKontakte.ru Downloader and spending 5 mins making an account at VK.com, you’re ready to go. Simply click in the ‘Search’ box at the top of the page and choose “by audio file” from the drop down box.

All search results will be displayed with the usual ‘play’ icon for streaming and right next to that will be a new icon. Press that and the chosen track is downloaded. It really is that simple and absolutely no Mulve in sight.

TorrentFreak recommends using these tools to find music on VK that isn’t on IFPI, BPI and RIAA labels. One, we don’t want to be the next people subjected to baseless accusations of Conspiracy to Defraud, and two, because there is quality musical life beyond the Big Four if only people would take the time to look for it.