When Netflix had just started offering online video content years ago, it didn’t consider piracy to be a major issue.

However, now that the company itself is one of the largest content producers, this outlook has changed drastically.

Like many other rightsholders, Netflix now keeps a close eye on pirate sites and services. The company has its own in-house anti-piracy team with offices on several continents and also works with third-party anti-piracy vendors.

Increasingly, the streaming service is also teaming with other rightsholders to coordinate its enforcement efforts. Netflix is one of the founding members of the Alliance For Creativity and Entertainment (ACE) and in 2019 it joined the Motion Picture Association (MPA).

This week brings yet another expansion. This time the company is building out its internal anti-piracy team which, according to Netflix, is required to support the business as it continues to grow.

“Netflix has an ever-growing number of Originals and other key titles launching each month that need to be protected from piracy,” the company writes in a job listing.

The person who takes the newly created role of “Title Coverage and Insights Manager” will have to lead several internal content protection initiatives. For this position, Netflix seeks candidates in Los Angeles, Amsterdam, and London.

In addition to the aforementioned cities, the anti-piracy team is also operating in Singapore, which shows that it has established a global presence over the past few years.

These types of job listings can give a glimpse into the anti-piracy priorities at the streaming giant, which is always interesting to see.

For example, the “responsibilities” of the prospective manager include partnering with online platforms such as YouTube and Facebook, to ensure that Netflix’s content is properly protected.

In addition, the manager is required to build a dynamic and impactful coverage strategy, evaluate new technological solutions to tackle piracy online, while building relationships with other members of the MPA. 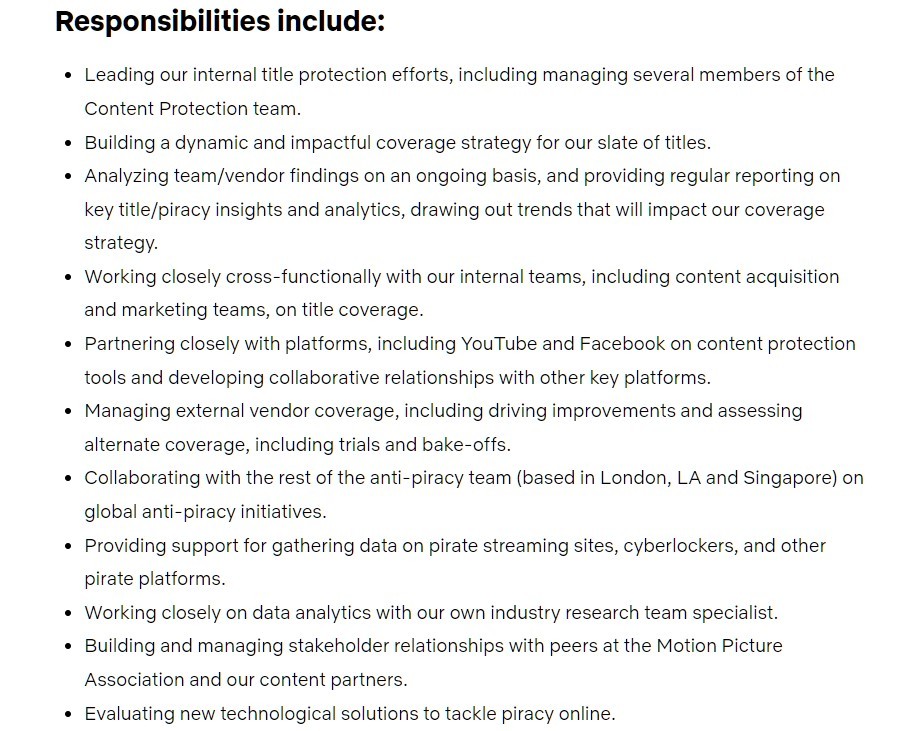 The anti-piracy strategy is in large part focused on data. This requires analyzing piracy insights and analytics, while also supporting data gathering on pirate streaming sites, cyberlockers, and other pirate platforms.

In addition to pirate sites and services, Netflix will also need to protect content on the publishing side.

Over the past months, several high profile Netflix titles leaked early, including the season 2 premiere of “The Witcher” and “The Power of the Dog”, which leads the field of Oscars contenders this year.

Those who are interested in applying for a new job can find out more at Netflix’s official site. Please note that, ideally, candidates should have deep experience with takedown programs, analyzing piracy data, and leading a team.