When YouTube first got off the ground in 2005, most of its users would’ve been oblivious to how closely copyright law would govern their online activities moving forward.

Seventeen years later, with billions of internet users now both consumers and creators of content, people are becoming more educated. Terms such as DMCA, copyright strike and fair use are now regular features in YouTube content creator communities but that hasn’t necessarily led to fewer infringements or happier rightsholders.

Media companies in Japan believe that the use of overwhelming force to send a deterrent message may go some way to solving these problems.

The Rise of ‘Fast Movies’ Receives a Crushing Response

Up until last summer, so-called ‘Fast Movies’ didn’t seem like a key concern for the movie industry. These heavily edited copies of mainstream movies aim to summarize key plot lines via voice-over narration in about 10 minutes. While no replacement for the real thing, these edits accumulated millions of views and incurred the wrath of rightsholders, leading to the arrest of three people in Japan.

According to companies including Toho and Nikkatsu, these people infringed copyrights on a grand scale for monetary gain. After entering guilty pleas, last November all three received suspended prison sentences and were ordered to pay fines to the state. The deterrent messaging of that criminal case is now being underlined with a civil lawsuit.

The defendants admitted running multiple YouTube channels leading to their ‘Fast Movies’ being viewed around 10 million times. The 13 plaintiffs in the civil lawsuit say that as a result, they collectively incurred damages of two billion yen, around $15.7 million.

For the purposes of their civil damages lawsuit, the plaintiffs have settled on a partial claim of ‘just’ 500 million yen ($3.9 million) against the three defendants collectively.

Clear indications of how seriously the anti-piracy groups and media companies are taking this action were on display after the lawsuit was filed last week. A press conference was held in Tokyo with a representative of CODA and three attorneys present to answer questions on the case. (Image credit: CODA) 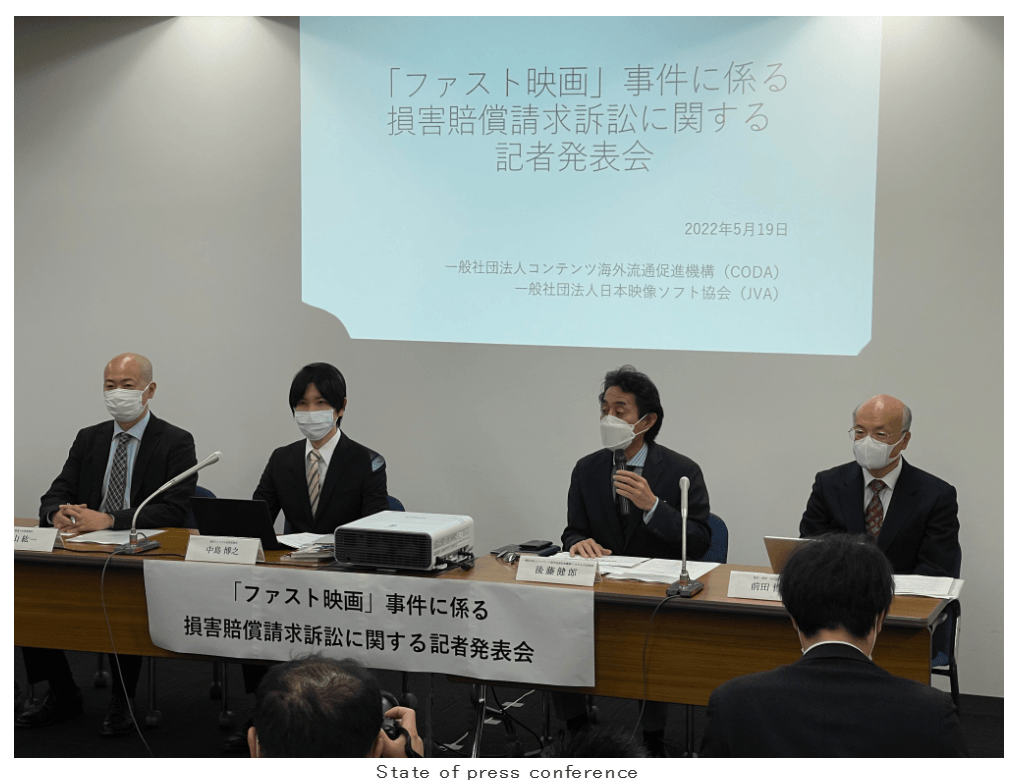 Those present, including CODA director Takero Goto, highlighted that the three defendants committed criminal acts when they uploaded the movie edits and then profited from advertising revenue.

The civil action aims to underline those convictions with a strong message that rightsholders will not allow people to free-ride on creators’ content without facing significant financial consequences.

The overall message is one of deterrence coupled with the reaffirmation of copyright law, Goto said.