Bungie Takes Another Shot at Cheat Seller AimJunkies in Court

Last summer, Bungie filed a complaint at a federal court in Seattle, accusing AimJunkies.com of copyright and trademark infringement, among other things.

The same accusations were also made against Phoenix Digital Group, the alleged creators of the software.

The parties initially entered settlement negotiations but the process was derailed when the video game maker moved for a default judgment. In response, AimJunkies went on the defensive; and not without success.

AimJunkies argued that cheating isn’t against the law. In addition, it refuted the copyright infringement allegations; these lacked any substance and were ungrounded because some of the referenced copyrights were registered well after the cheats were first made available.

This was a severe blow for Bungie but the court did offer the game maker the option to file a new complaint to address these shortcomings.

Bungie seized the opportunity to ‘respawn’ and filed an amended complaint at the U.S. District Court in Seattle late last week. This new complaint adds more details to the copyright infringement claims as well as the role of several key persons that are allegedly involved.

The game maker starts out by stressing the damage cheaters cause to the game experience, which eventually ruins the fun for legitimate players.

“Cheaters ruin the experience of playing Destiny 2. Not only do cheaters impair the enjoyment of gameplay by non-cheaters with whom they interact in-game; cheaters illegitimately obtain and thereby devalue the in-game rewards that non-cheaters obtain legitimately.

“It is vital to Bungie’s and Destiny 2’s success that Bungie keep cheaters out of the game,” the complaint reads.

In addition to listing AimJunkies.com as a defendant, Bungie also targets the associated company Phoenix Digital and its three managing members; David Schaefer, Jeffrey Conway, and Jordan Green. The final defendant is James May, who was allegedly involved in the development of the cheats.

These men were all allegedly involved in the development of the cheat software. In that process, they are believed to have reverse-engineered the copyrighted game content.

“In order to create that cheat software, and on information and belief, Mr. Schaefer, Mr. Conway, Mr. Green and Mr. May reverse engineered and copied the software code for Destiny 2,” Bungie writes.

Among other things, Bungie claims that the cheat relies on copyrighted data structures that are specifically used for Destiny 2’s rendering. This was supposedly used for the ESP feature, for example, which allows cheaters to see other players through solid walls.

“On information and belief, in order to provide this ESP feature, Defendants copied the Destiny 2 software code that corresponds to the data structures for player positioning [in] Destiny 2, and reverse engineered the software code for Destiny 2’s rendering functions.” 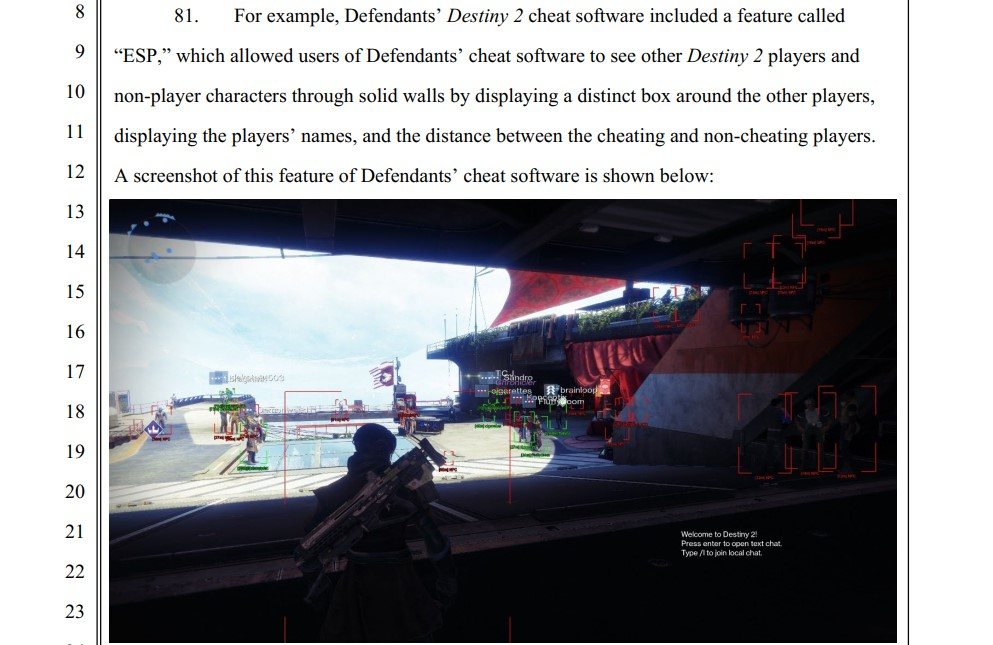 The new complaint also claims that the defendants effectively created a derivative of some of the copyrighted Destiny 2 code and distributed that without permission to people who bought the cheats.

The new copyright claims are indeed more detailed than those alleged in the original complaint. Whether this will be enough for the court to allow the case to continue remains to be seen.

AimJunkies no longer offers the cheat on its website but Bungie wants to continue the case nonetheless. The game maker is worried that the cheats may be relisted at a later date, sold to a third party, or shared online for free.

The last option was previously mentioned by AimJunkies director Mr. Schaefer, who allegedly issued a veiled threat to Bungie’s CEO over email.

“In the old days sites would put the source code on public forums for every 14yo to get and make a hack for your game. Most of the time when they do it [sic] they make it a free public cheat accessible to everyone,” the email read.

“Imagine players having access to cheats for free? I don’t think anyone wants to go back to those days. The net would be you would have more cheaters in your game then [sic] before the crusader came in. Is that what you’re looking for in your game?”

Selling AimJunkies to a third party is a realistic option too. In the amended complaint Bungie references a TorrentFreak article where AimJunkies states that it was in the process on selling the company to a group of Ukrainian investors.

This sale is still on, AimJunkies informed us over the weekend. Today, the company issued a press release together with the Ukrainian company Blome Entertainment (BME), confirming their intentions.

According to the press release, BME completed and signed definitive agreements with AimJunkies to acquire “Aimjunkies.com.” The cheat seller will, however, continue to operate independently.

“In BME, we have found a purchasing partner that fully supports us and wants to accelerate our vision of distributing meaningful entertainment experiences that span generations, all while valuing the creative independence that is the heartbeat of Aimjunkies,” Phoenix Digital CEO David Schaefer comments on the announcement

“Aimjunkies has distributed and continues to distribute some of the world’s most beloved videogame cheats and, by aligning its values with people’s desire to share gameplay cheat experiences in Eastern Europe, they bring together millions of people around the world,” BME CEO Maxim Arshinov adds.

What the forthcoming acquisition means for the legal battle is not immediately clear, but we will keep a close eye on developments.