Top tier football in the UK is handled by the English Premier League (EPL) and broadcasting partners Sky and BT Sport. All face considerable problems with Internet piracy, through free web or Kodi-based streaming and premium IPTV feeds.

To mitigate the threat, earlier this year the Premier League obtained a unique High Court injunction which required ISPs such as Sky, BT, and Virgin to block ‘pirate’ football streams in real-time.

Although the success of the program was initially up for debate, the EPL reported it was able to block 5,000 server IP addresses that were streaming its content. When that temporary injunction ran out, the EPL went back to court for a new one, valid for the season that began this past weekend. There are signs the EPL may have upped its game.

As soon as the matches began on Saturday, issues were reported at several of the more prominent IPTV providers. Within minutes of the match streams going live, subscribers to affected services were met with black screens, causing anger and frustration. While some clearly knew that action was on the cards, relatively few had an effective plan in place.

One provider, which targets subscribers in the UK, scrambled to obtain new domain names, thinking that the existing domains had been placed on some kind of Premier League blacklist. While that may have indeed been the case, making a service more obscure in that sense was never going to outwit the systems deployed by the anti-piracy outfits involved.

Indeed, the provider in question was subjected to much chaos over both Saturday and Sunday, since it’s clear that large numbers of subscribers had absolutely no idea what was going on. Even if they understood that the EPL was blocking, the change of domain flat-footed the rest. The subsequent customer service chaos was not a pretty sight but would’ve been a pleasure for the EPL to behold.

An interesting side effect of this EPL action is that even if IPTV subscribers don’t care about football, many were affected this past weekend anyway.

TF is aware of at least three services (there are probably many more) that couldn’t service their UK customers with any other channels whatsoever while the Premier League games were being aired. This suggests that the IP addresses hit by the EPL and blocked by local ISPs belonged to the same servers carrying the rest of the content offered by the IPTV providers.

When the High Court handed down its original injunction it accepted that some non-Premier League content could be blocked at the same time but since that “consists almost exclusively of [infringing] commercial broadcast content such as other sports, films, and television programs,” there was little concern over collateral damage.

So the big question now is what can IPTV providers and/or subscribers do to tackle the threat?

The first interesting thing to note is not all of the big providers were affected this past weekend, so for many customers the matches passed by as normal. It isn’t clear whether EPL simply didn’t have all of the providers on the list or whether steps were taken to mitigate the threat, but that was certainly the case in a handful of cases.

Information passed to TF shows that at least a small number of providers were not only waiting for the EPL action but actually had a backup plan in place. This appears to have resulted in a minimum of disruption for their customers, something that will prove of interest to the many frustrated subscribers looking for a new service this morning.

While the past few days have been somewhat chaotic, other issues have been muddying the waters somewhat.

TF has learned that at least two, maybe three suppliers, were subjected to DDoS attacks around the time the matches were due to air. It seems unlikely that the EPL has been given permission to carry out such an attack but since the High Court injunction is secret in every way that describes its anti-piracy methods, that will remain a suspicion. In the meantime, rival IPTV services remain possible suspects.

Also, a major IPTV stream ‘wholesaler’ is reported to have had technical issues on Saturday, which affected its ability to serve lower-tier providers. Whether that was also linked to the Premier League action is unknown and TF couldn’t find any source willing to talk about the provider in any detail.

So, sports fans who rely on IPTV for their fix are wondering how things will pan out later this week. If this last weekend is anything to go by, disruption is guaranteed, but it will be less of a surprise given the problems of the last few days. While some don’t foresee huge problems, several providers are already advising customers that VPNs will be necessary.

An IPTV provider suggesting the use of VPNs 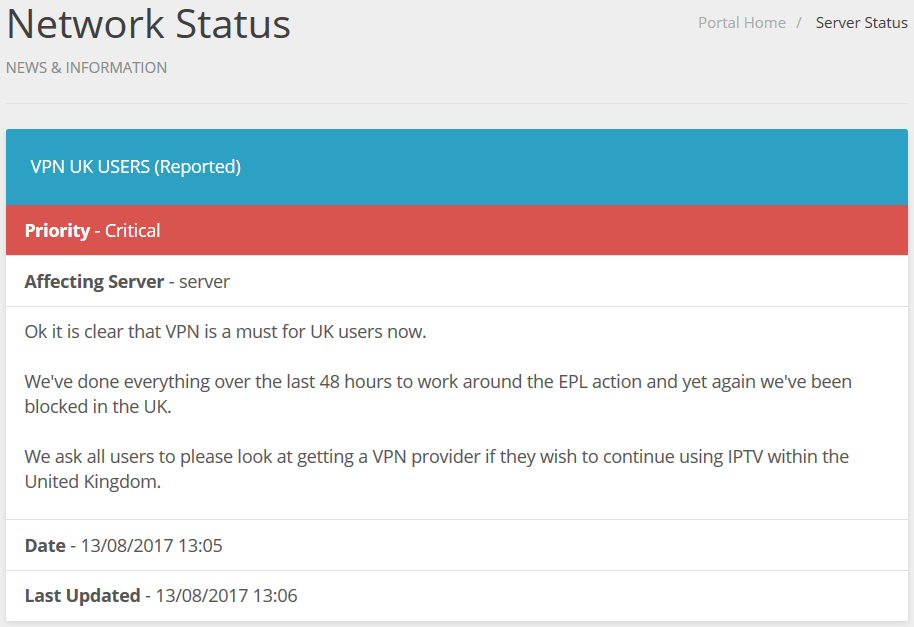 While a VPN will indeed solve the problem in most cases, for many subscribers that will amount to an additional expense, not to mention more time spent learning about VPNs, what they can do, and how they can be setup on the hardware they’re using for IPTV.

For users on Android devices running IPTV apps or Kodi-type setups, VPNs are both easy to install and use. However, Mag Box STB users cannot run a VPN directly on the device, meaning that they’ll need either a home router that can run a VPN or a smaller ‘travel’ type router with OpenVPN capabilities to use as a go-between.

Either way, costs are beginning to creep up, if IPTV providers can’t deal with the EPL’s blocking efforts. That makes the new cheaper football packages offered by various providers that little bit more attractive. But that was probably the plan all along.