Under U.S. law, streaming and file-sharing are seen as two different offenses. Not just from a technical point of view, but also in the way they are punished.

Streaming is categorized as a public performance instead of distribution, which can only be charged as a misdemeanor, not a felony.

Lawmakers tried to change this with the Commercial Felony Streaming Act in 2011, and later with the SOPA and PIPA bills. These bills were shelved after public outrage, with many people fearing that uploading copyrighted YouTube videos could possibly land them in jail.

As a result the gap between streaming and traditional file-sharing still remains today. This makes it hard to prosecute pirate streaming services. However, a new bill introduced by Senator Thom Tillis aims to change this.

The bill, titled the ‘Protecting Lawful Streaming Act of 2020’, has bipartisan support and was drafted based on input from copyright holders, tech companies, and public rights experts. This resulted in a final draft that is less broad than previously proposed bills.

In short, the bill proposes to amend US copyright law by adding a section that allows streaming piracy services to be targeted. It is tailored towards services that exploit streaming piracy for commercial gain, leaving individual streamers out of the crosshairs. 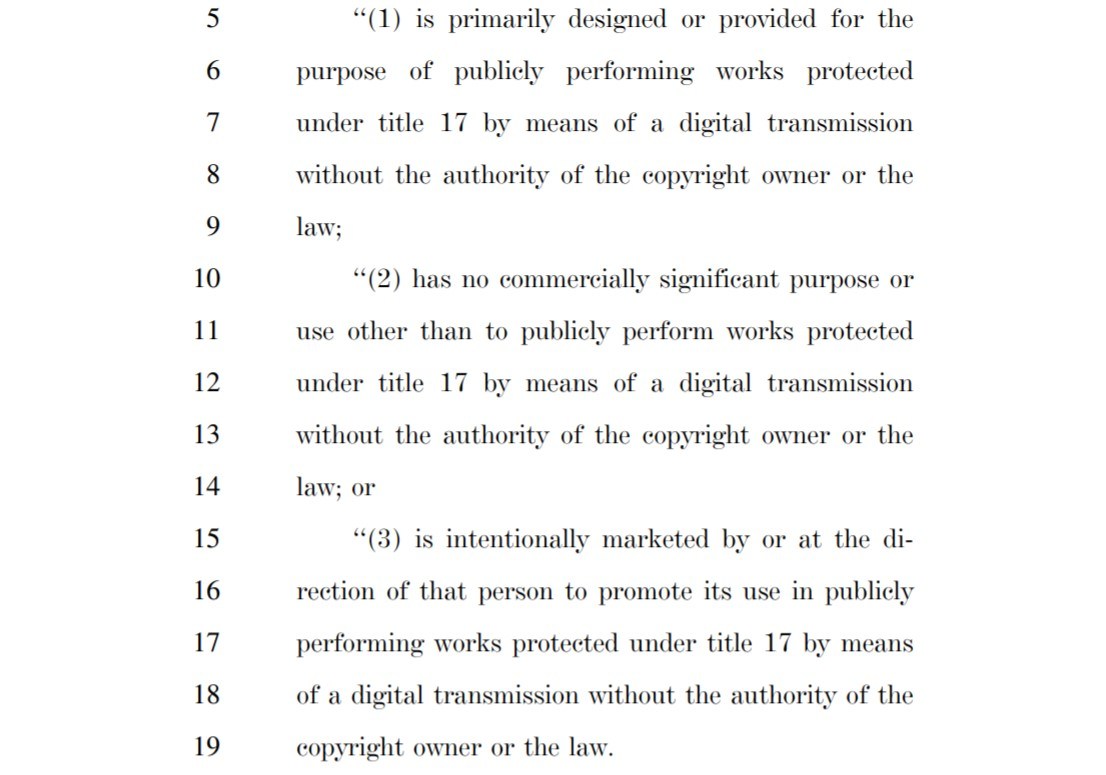 The bill is targeting people or organizations that provide a “digital transmission service.” This means that it doesn’t apply to ordinary users who stream something on YouTube, Twitch, or any other streaming platform.

This distinction is crucial as the opposition to previous bills focused on the fear that new legislation would send ordinary people to jail for accidentally streaming a copyrighted video or music track.

Instead, the ‘Protecting Lawful Streaming Act of 2020’ intends to criminalize commercial streaming piracy services. Those who are caught face fines and a prison sentence, which for repeat offenders can extend to ten years.

Commenting on the bill, Senator Tillis notes that pirate streaming services are costing the US economy billions of dollars every year. The new legislation should help to change this without criminalizing regular streamers.

“This commonsense legislation was drafted with the input of creators, user groups, and technology companies and is narrowly targeted so that only criminal organizations are punished and that no individual streamer has to worry about the fear of prosecution,” Tillis said.

Lawmakers received input from rightsholders as well as the CCIA, which includes prominent members such as Amazon, Cloudflare, Facebook, and Google. The CCIA has previously been critical of streaming felony bills, but it will now remain neutral.

The same applies to the civil rights group Public Knowledge, which also helped in shaping the new bill. While Public Knowledge isn’t in favor of adding criminal penalties for copyright infringement, it sees the new proposal as a reasonable solution.

“[T]his bill is narrowly tailored and avoids criminalizing users, who may do nothing more than click on a link, or upload a file. It also does not criminalize streamers who may include unlicensed works as part of their streams,” says Meredith Rose, Public Knowledge’s Senior Policy Counsel.

With a more limited scope, the latest streaming piracy bill has a greater chance of passing than its predecessors. However, that doesn’t mean that there’s no opposition.

Aside from its contents, which not everyone will agree with, there is fierce critique on the process. Instead of letting the bill pass through the regular process, it will be added to the must-pass spending bill, together with other copyright proposals. That is not how copyright law should be created, opponents warn.