Although the blocking measures aren’t expected to be put in place until after mid-October, a breakdown in one of Newzbin2’s DNS servers during the last few days led to fears that it had been implemented early.

The fault was quickly fixed, and Newzbin2’s operators said the problem encouraged them to work harder on their promised anti-blocking solutions.

Today, TeamRDogs – the group behind the site – released Newzbin Client 1.0.0.127, the first public piece of software designed to circumvent BT’s Cleanfeed online censorship system, the tool which the MPA hopes can neutralize Newzbin2 in the UK.

“This is targeted at UK users who are likely to get blocked in October. This first version is a bit rushed and so not very polished. As time goes by we shall improve it and add features.”

The software provides a basic web interface for the Newzbin2 site but while OSX and Linux versions are planned for the future, the client (which downloads in a 2.4mb installer) is currently only available for Windows users. So how does it work?

“We can’t say how our client application works but it uses a number of techniques to utterly defeat Cleanfeed,” said Mr White in an email.

Using network protocol analysis software, TorrentFreak ran some basic tests on the Newzbin2 client today which revealed that it does indeed defeat known features of Cleanfeed in a number of ways.

Initially the client tries to resolve the site’s domain name to an IP in the usual manner via DNS, but from there, and without going into too many details, an encrypted session is initiated between the client and the Newzbin2 site in a way that Cleanfeed won’t like, rendering blocking impractical and snooping more or less impossible. 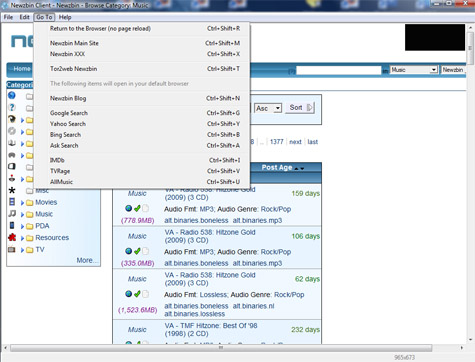 As can be seen from the screenshot above, the client also provides some other features such as accessing the Newzbin2 website via the TOR anonymity network. Other useful links to online resources such as IMDb and common search engines are also provided.

The client is in the early stages of development and will need a few features updating if it wants to be near bulletproof. We’re sure Newzbin2’s Mr Violet, the guy who put in much of the work, has all that covered – and more.

Newzbin2: BT Have Started To Censor Us