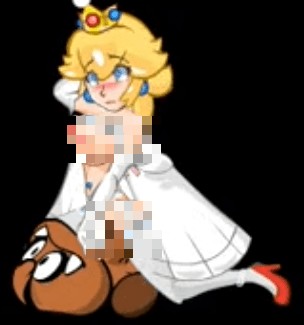 Over the past several years it has become increasingly apparent that Nintendo isn’t prepared to tolerate instances where its copyright or trademark rights may have been breached by third parties.

Many of Nintendo’s responses are fairly straightforward, targeting platforms that offer Nintendo games without permission or those that provide tools, software and workarounds that undermine protection mechanisms designed to prevent copying.

Some, however, don’t fall neatly into any of these categories.

“It’s a game where players take on the role of Princess Peach. Bowser is invading, the citizens of Mushroom Kingdom are under Kamek’s spell to be super aroused, and Mario is missing. What’s a princess to do? Stomp some enemies, or start putting out, to save her kingdom,” he told Doujins.

Finding a relevant screenshot to display without needing some element of censorship to accommodate younger readers proved pretty fruitless, so those interested in viewing some of PUT’s gameplay can do so on Xvideos.com, where just one video of the game in action has more than two million views (NSFW).

Needless to say, the acts witnessed are not something one would normally associate with Nintendo products or characters. It will come as no surprise then after either waiting eight years or perhaps just discovering the game for the first time, Nintendo has ordered its legal team into action.

PUT made Microsoft-owned Github its development home but in a DMCA notice served on the platform late last week, the gaming giant explained that PUT infringes the copyrights of its Super Mario video game franchise.

Aren’t Parodies Covered By Fair Use?

In its takedown notice filed with Github, Nintendo said it had considered all fair use exceptions but after a review, ultimately found that it “does not believe [PUT] qualifies as a fair use of Nintendo’s copyright-protected work.”

A close example to the case in hand appears to lie in the 1978 case of Walt Disney Productions v. Air Pirates. After the latter produced a comic book featuring 17 Disney characters including Mickey Mouse involved in sex and drugs, Disney sued and the court found that the use was not fair.

“The U.S. Ninth Circuit Court found that the amount of the portion copied exceeded permissible levels, noting that, ‘[w]hen persons are parodying a copyrighted work, the constraints of the existing precedent do not permit them to take as much of a component part as they need to make the ‘best parody.’ Instead, their desire to make the ‘best parody’ is balanced against the rights of the copyright owner in his original expressions,” Lynn wrote, citing the decision.

The important position that remains unchanged today is that such fair use cases can be both complex and expensive to defend. With that in mind, it seems unlikely that developer Ivan Aedler will contest the DMCA takedown filed by Nintendo, since that puts the company in the position of having to file a lawsuit against him to prevent Peach’s Untold Tale from being reinstated on Github.

At the time of writing, Aedler had not responded to TorrentFreak’s request for comment.