Nothing New Under The Copyright-Eclipsed Sun

When the printing press arrived in 1453, scribe-craft was a profession in high demand. The Black Death had taken a large toll from the monasteries, who were not yet repopulated, so copying books was expensive. 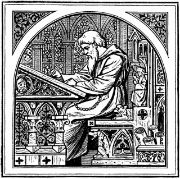 Obsoleting scribes was not a popular development with the Catholic Church, who tried to ban the printing press with increasingly harsh punishments, up to and including the death penalty for using a printing press to copy books.

“How will the monks get paid?”, they argued to justify this. Still, even the death penalty couldn’t stop the copying.

Of course, it wasn’t about payment of monks. The Catholic Church couldn’t have cared less, really. It was about control over knowledge and culture. Once most of the populace had learned to read, the Church lost its grip permanently.

England chose a different route. Seeing how even the death penalty hadn’t worked, Queen Mary I needed an ally within the printing industry. She awarded a printing monopoly to London’s printing guild, the London Company of Stationers, in return for being able to censor anything before publication.

The monopoly was awarded on May 4, 1557. It was called copyright.

This alliance between industry and government worked well to suppress dissent. Fast forward 138 years, and censorship wasn’t really all that modern anymore. The British Parliament let the copyright monopoly expire in 1695, and the Stationers lost a very lucrative monopoly. They begged to get it back for 15 years.

Eventually, Parliament was persuaded. The printers and distributors complained that nothing would get printed or distributed without a monopoly. (Note how this is very, very different from nothing being created without a monopoly.) But they suggested that this monopoly originate with the author and be classified as property, so it could be sold to a printer.

In doing this, the printers killed three birds with one stone. One, they met Parliament’s requirement that there would be no more central point which enabled censorship, so they would reconsider the monopoly. Two, the printers would still have a de facto monopoly as authors would be forced to sell the monopoly to printers. Three, classifying the monopoly artificially as “property” would write it into Common Law rather than case law, giving it much stronger legal status.

The copyright monopoly was re-enacted in this form in 1709, and took effect on April 10, 1710, in the so-called Statute of Anne.

The United States adopted a similar passage in its constitution later, but with much clearer justification — that the only legitimate beneficiary of the copyright monopoly is the public.

Fast forwarding to the advent of libraries, the monopolist publishers — now strong in their almost religious belief that they had a right to dictate how people could read — tried to ban the lending of books. You couldn’t allow people to read without paying for their own copy, they argued. When politicians considered public libraries, the monopolist publishers went stratospheric.

“You can’t let anybody read any book for free! Not a single book will be sold ever again! Nobody will be able to live off their writing! No author will write a single book ever again if you pass this law!”

Parliament in the 1800s was much wiser than today, however, and saw the copyright monopolists’ tantrum for what it was. They decided that the public’s access to knowledge and culture had a greater value to society than a monopolist being paid every time a book was opened, and so, the first public library in the UK opened in 1850. And as we all know, not a single book has indeed been written since. Oh, wait. There are more books being written than ever in history. I mean, the argument is as bogus when used today as it was then.

After the copyright monopoly internationalized in 1886, music became more and more interesting. The record industry was invited to Rome in 1933 by Confederazione Generale Fascista dell’Industria Italiana in order to try to corporatize the copyright monopoly a bit further. IFPI was formed in this Rome meeting. The ambition succeeded, with the advent of the Rome Convention in 1961, where the record industry was granted copyright-identical monopolies called “neighboring rights”.

One notes here that the record industry’s monopoly is as recent as 1961. Not the image they paint.

Currently, the United States is trying to bully every other country to respect the copyright monopoly’s stronger and stronger privileges. They issue a “Special 301 list” every year, which is supposed to be a blacklist of the world’s worst “offenders”. A majority of the world’s population is on the list. Spain and Canada made the list this year, too. A personal political goal for me is to put Sweden back on that list.

To summarize, the battle over who controls knowledge and culture has raged for well over 500 years. The same justifications have been used all through those 500 years. But learning from history, we can see how the choke hold of the Catholic Church was defeated. We should repeat that course of action against the copyright monopoly today. Teach everybody to share. Make everybody experience what it’s like to have all of humanity’s knowledge and culture at their fingertips. It can’t be unexperienced, just like people 500 years ago couldn’t unlearn to read.

Rick Falkvinge is a regular columnist on TorrentFreak, sharing his thoughts every other Friday. He is the founder of the Swedish Pirate Party, a whisky aficionado, and a low-altitude motorcycle pilot. His blog at http://falkvinge.net focuses on information policy.