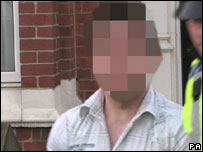 The British and the Dutch police both contributed to the investigation that was initiated by the IFPI and the BPI, two well known anti-piracy organizations. The operation was supported by Interpol who coordinated the international cooperation.

According to early reports OiNk’s servers were confiscated in Amsterdam last week. This seems to be unlikely because the site was still fully functional 24 hours ago. The administrator of OiNK was arrested this morning by the Cleveland Police. The BBC reports that his employer and the home of his father were raided as well.

Jeremy Banks, Head of the IFPI’s Internet Anti-Piracy Unit, said in a reponse to the news: “OiNK was central to the illegal distribution of pre-release music online. This was not a case of friends sharing music for pleasure. This was a worldwide network that got hold of music they did not own the rights to and posted it online.”

OiNK hosted hundreds and thousands of torrents with over a million peers which makes it more popular than most public trackers. The site was known to be one of the first places where leaked music albums appeared, so anti-piracy outfits such as MediaDefender were keeping a close eye on it.

In July the tracker already changed its name from OiNK.me.uk to OiNK.cd due to “legal” issues with their domain registrar. Unfortunately it now seems that the popular private BitTorrent tracker is in bigger trouble.