There are hundreds, possibly thousands, of private BitTorrent sites on the Internet today. Some offer general content, others specialize in some way, but it is extremely rare for any to achieve a high level of public awareness.

One that did was called OiNK, a closed-door community that to many was the greatest music-focused torrent community the Internet had ever seen. Launched in May 2004 by Englishman Alan Ellis, OiNK became synonymous with quality. The site indexed every style of music imaginable and prided itself on bitrates that commercial music stores found hard to beat.

As a result OiNK peaked at more than 180,000 members and received celebrity endorsements including one from Nine Inch Nails star Trent Reznor who said it was the world’s greatest record store. But the site’s achievements would not go unpunished and in 2007 Ellis was arrested and the site was shutdown, yet another victim of a music industry campaign to stymie the spread of unauthorized content.

Following a trial in which Ellis was accused of defrauding the music industry, in early 2010 came a verdict of “not guilty” and he walked from court a free man. For the site itself, shuttered and its members dispersed more than two years earlier, the story was over.

But now more than three years on there are some interesting noises coming from the former home of the Pink Palace, where cute avatars were mandatory and a curly-tailed farmyard animal adorned the front page.

Visitors to any of OiNK’s former domains are today greeted with a monochromatic picture of London’s Battersea power station. Look closely and a tiny cartoon pig can be seen flying between the iconic chimneys above an invitation to sign up and a prompt to never forget the events of October 23 2007. Click ahead and a more familiar feel returns. 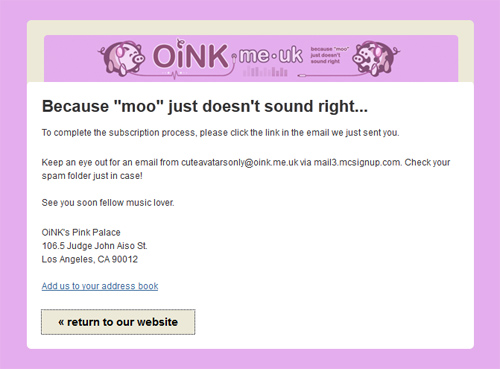 So what does the site have in store?

TorrentFreak spoke with the current owner of the OiNK domains – Oink.me.uk and Oink.cd – who confirmed a relaunch and told us that a different approach could be expected this time round.

“I’ll let you know that a different route is being taken at this time to continue the site’s legacy in a legal format,” TorrentFreak was informed.

So what can users of the new OiNK expect? A clue can be found on the main page where interested artists are invited to leave their details. The final item on the short questionnaire is perhaps the most telling.

David Cook, specialist cyber crime solicitor at Pannone who successfully defended one of Oink’s uploaders in 2010, says that an OiNK return has the potential to be a plus for artists, depending on the execution.

“A method for an unsigned artist uploading their music to the site and receiving remuneration from the adverts on the site would sound like an innovative idea. Having said that, details are sketchy to say the least. I just hope that the OiNK story is not sullied by what comes next, as happened for Napster,” Cook said.

TorrentFreak also spoke with former OiNK owner Alan Ellis who thanked us for our contact but said that having sold the domains a few years ago, the project is now someone else’s baby.

At this stage it seems unlikely that OiNK will return to its former private tracker glory but there are signs that it will maintain its focus on music, quite possibly with an emphasis on the development of independent artists. Maybe the site will get one last shot at annoying the major labels after all.