Some of these services are available for just a few euros, dollars or pounds per month, often in HD quality.

While service levels can vary, some of the best also offer comprehensive Video On Demand (VOD), with hundreds and in some cases thousands of movies and TV shows on tap, supported by catch-up TV. Given their professional nature, the best IPTV products are proving a real thorn in the side for rights holders, who hope to charge ten times the money while delivering a lesser product.

As a result, crackdowns against IPTV providers, resellers and other people in the chain are underway across the world, but Europe in particular. Today’s news comes from Italy, where Operation “Pirate On Demand” is hoping to make a dent in IPTV piracy.

The operation is being headed up by the Guardia di Finanza (GdF), a department under Italy’s Minister of Economy and Finance. Part of the Italian Armed Forces, GdF says it has targeted nine sites involved in the unlawful distribution of content offered officially by local media giants Mediaset and Sky.

The authorities received assistance of a specialized team from the local anti-piracy group DCP, which operates on behalf of a broad range of entertainment industry companies.

According to GdF, a total of 89 servers were behind the portals which together delivered an estimated 178 terabytes of pirate content, ranging from TV shows and sports, to movies and children’s entertainment.

The nine portals are in the process of being blocked with some displaying the following message.

Seizure notice on the affected sites 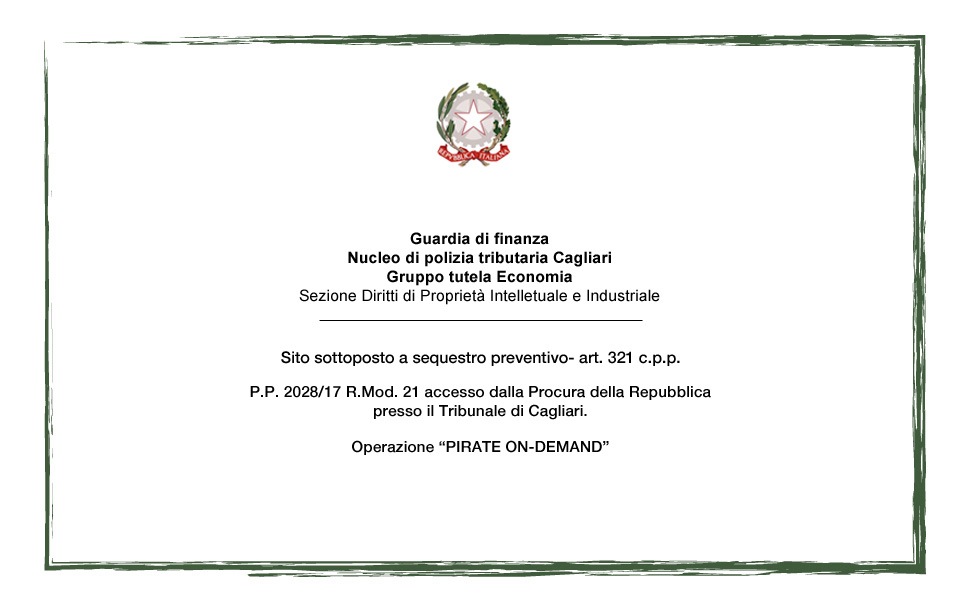 The investigation began in September 2016 and was coordinated by Giangiacomo Pilia, the prosecutor at the Cagliari Court. Thus far, two people have been arrested.

A person arrested in the Varese area, who police believe is the commercial director of an illicit platform, has been charged with breaching copyright law.

A second individual arrested in Macerata is also suspected of copyright offenses, having technically managed the platform. Computer equipment, decoders, smart cards, and other electronic devices were also seized.

In addition to blocking various web portals, measures will now be taken to block the servers being used to supply the IPTV services. The GdF has also delivered a veiled threat to people who subscribed to the illicit services.

“It is also in the hands of investigators the position of those who have actively accessed the platforms by purchasing pirated subscriptions and thus benefiting by taking advantage,” GdF said.

The moves this week are the latest to take place under the Operation “Pirate On Demand” banner. Back in March, authorities moved to shut down and block 15 portals offering illegal IPTV access to Mediaset and Sky channels.