Last year, the torrent ecosystem lost two of its biggest sites. First KickassTorrents was taken down following a criminal investigation by the FBI, resulting in indictments against the operators.

A few days later, Torrentz.eu decided to close its doors as well, albeit voluntarily. Without prior warning, all torrent listings were removed from the meta-search engine, which was the third largest torrent site at the time.

The site’s operator kept the website online, but instead of offering links to the usual torrents, its users were left with the following message: “Torrentz will always love you. Farewell.”

Today, more than a year later, not much has changed. Torrentz is still online but the torrent search engine is still not functional. This role was taken over by an unrelated site carrying the name Torrentz2, which has millions of daily visitors itself now. 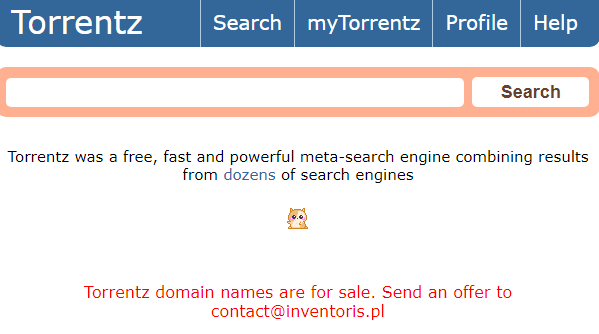 Considering the history of the site and the fact that it still has quite a bit of traffic, this may pique the interest of some online entrepreneurs.

For sentimental Torrentz fans, a sale can go both ways. It could either be used for a new torrent related venture, or someone could scoop it up just to fill it with ads, or even worse.

One thing potential buyers have to be aware of is that the site is still blocked in several countries, including the UK. This, despite the fact that it hasn’t carried any links to infringing content for over a year.

TorrentFreak reached out to the owner of Torrentz to find out why he decided to sell the site now. At the time of writing we haven’t heard back yet, but it’s clear that he’s ready to move on.