While BitTorrent’s Oscar went to District 9, the Academy members chose The Hurt Locker as the best picture of 2009. As was the case with most previous Oscar winners, the film’s overwhelming win encouraged many BitTorrent users to fire up their download client to see what all the fuzz is about.

The day after the award show ‘the hurt locker’ was the most typed in search phrase on BitTorrent, with ‘hurt locker’ ending up in ninth place. This increased demand was also reflected in the download numbers which skyrocketed. Since its win at the Oscars the film has been downloaded well over a million times.

Interestingly, The Hurt Locker was already available online in high quality for more than a year, and months before it premiered in movie theaters in the United States. The film’s screener leaked in February of last year, but it has never generated as many downloads as it did this week. Thanks to the Oscar boost, the total number of Hurt Locker downloads on BitTorrent are now nearing 10 million.

The sudden rise in demand is of course not limited to BitTorrent and other file-sharing networks. A film that does well on BitTorrent is usually doing well at the box-office or in the movie stores too, and indeed, DVD sales for The Hurt Locker went up at an equal rate.

This week the DVD topped the bestseller list at the online retailer Amazon and Director of Sky Box Office, Ian Lewis, reports a “significant increase” in demand on its Sky Box pay-per-view service. Similarly, the number of theaters playing the film is doubling this weekend to accommodate the ‘Oscar Bounce.’

The Hurt Locker was not the only Oscar winner to see a boost in unauthorized downloads after last Sunday. Crazy Heart, The Blind Side and Precious and Up saw a similar but less pronounced upswing.

The Day After the Oscars 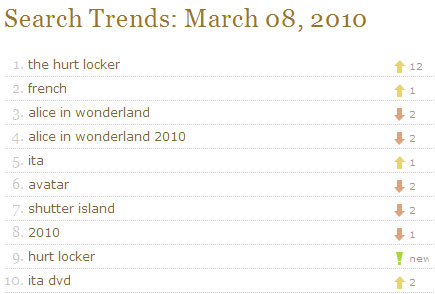 Pirated Copy of ‘The Hurt Locker’ Airs on National TV