Successful actor and Academy member Britt Leach says he was “so very proud to be a member of the Academy of Motion Picture Arts and Sciences” when he was accepted over 17 years ago. How things have changed.

“I’ve always been very happy to receive these screeners; they have made me feel very important.” says Britt. “The Academy Awards! I would sit in front of our TV and play the tape or DVD and make notes on a legal pad; I would write the name of a film or actor that might deserve to be nominated. And then when the ballots came I would vote.” He admits to taking his “responsibility very seriously” – a great member it seems.

Then people got more paranoid about piracy: “So a legal document was sent out to members of the Academy that we all had to sign. By signing it we promised that we would never allow anybody to take possession of our screeners for any reason, and that we would be very careful with them.” He continues: “Anyway, I signed it even though it made me feel strange, like a criminal or something. Like “Academy Member” equals “criminal.” It was insulting, but I signed it.” 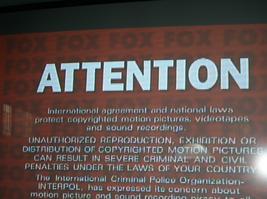 Also, the DVDs and packaging carried threatening messages, mentioning FBI, Interpol “and detailed how the individual screeners were watermarked and how all their ‘industry colleagues’ had better be careful or face severe penalties.”

Here is the rest of the sad tale, in Britt’s own, unique words:

“I mean what would happen to me and my family if one of my screeners got into the wrong hands and was duplicated and they were able to trace it back to me? Would Interpol, the FBI, come and get me? What about my wife? My cats? It made me very worried. I could go to prison. I mean what if somebody broke into my apartment? Or what if somebody who happened to be working here one day decided to steal one of my screeners? I could go to prison.”

“I began to explore security measures. Here’s a surveillance camera. It cost around $180.00. I thought about putting it above the Ã©tagÃ¨re where I store my screeners. I would attach it to some kind of video recorder, the kind they have in convenience stores to record robberies. But then I thought what if the power went out and the camera stopped working and a screener thief got in during the power blackout? So it came to me that in those situations I could really use a good guard dog.

The life and tragic death of ‘Screener Dog’

“A really good German shepherd guard dog that is already trained and would kill or seriously maim a screener thief. Such a dog costs about $7000.00 (seven-thousand dollars). The dog itself isn’t that expensive but the training is, and to complicate things the dog understands only German. So I would have to learn German in order to communicate with my screener dog. That’s even more expenseâ€”for the German lessons.

But then I thought that a dog can get sick or even poisoned or made very drowsy. I mean what if somebody who knew that I had screeners and knew also about my screener guard dog came to my apartment and broke a window and threw something in, piece of meat, with some dog sleeping stuff on it or even worse, poison? Put my screener guard dog to sleep or killed it, broke in and stole my screeners? So in addition to the trained German Shepherd I thought about a full security system for my apartment.”

“A company called ADT is very good I hear so I contacted them and found that their service cost $850.00 for starters. plus the safe they recommended for my screeners. Yes, I forgot to mention that ADT recommended that I buy a safe and keep my screeners in that safe until I wanted to watch one, return it immediately after watching. And a good screener-sized safe costs between five and seven-hundred dollars.

So that’s the cost of a surveillance camera, guard dog, German lessons,a safe, plus ADT, making a total of $8730.00 as an initial, screener-security investment plus my Academy dues of $250 per year. And who knows how much yearly maintenance of all that would cost. Dog food, vet bills.”

DRM Puts Britt on the brink

“That’s a lot of money for us, We live on my actor’s pension and Social Security plus Cathy’s paycheck. So I was thinking that maybe I would need to get a job to support screener security and Academy membership. And it seemed that going back to acting might be a choice, but at my age the only parts open for me are for very sick people or cadavers. And there are already so many old character actors out there looking for those jobs that I don’t think that I could make enough money to support screener security and Academy membership, too much competition. So acting was out.

And anyway we only have one car and Cathy needs it to get to work so it wouldn’t be available to get me to interviews.

DRM woes end in misery for Britt, huge loss for the Academy

“And I have reluctantly come to a decision. So that I won’t contribute to film piracy by inadvertently allowing one of my screeners to fall into the wrong hands, pirating hands, thereby costing the film industry millions of dollars (not to mention putting me in prison), I will not renew my membership in the Academy.

It makes me sad, but I’m also happy in a way. Because without those screeners being delivered to my vulnerable little home, with its multiple and human inefficiencies, I know that it will no longer be possible for me to harm the studios, my industry colleagues and the Academy. Yes, so by resigning from the Academy I will contribute to saving the film industry, and I have to be happy about that.”

I guessed they dumped DRM just a little too late to keep Britt.

The full post (it’s quite long!) by Britt Leach is available here.