Pastor Says Piracy is Literally Killing Actors, So He Gives Them Cars

With more than half of its population living in “absolute poverty,” Nigeria is one of the world’s poorest countries.

The economy has been growing in recent years but unfortunately, not all people reap the rewards. This is also true for those in the film industry.

With close to a billion U.S. dollars in box office revenue, “Nollywood” appears to be doing well. Still, not all actors and filmmakers are rich, as some people falsely assume.

According to Nigerian Pastor Joshua Iginla, piracy is one of the main problems, and he urges the local government to tackle this menace.

“The level of piracy in this country is serious; I hope government will do something about it,” Iginla says.

The pastor has been preaching this anti-piracy message for quite some time. He believes that Nollywood’s actors and actresses are Nigeria’s ambassadors, showing the world a positive image of the country.

However, he warns that the threat of piracy is real, noting that it has already caused several early deaths.

“Many [people] have died prematurely because they are hardworking but piracy has crippled them. We enjoy watching their films but we watch them when they are helpless with none to help them,” he says.

The public at large believes that all actors and actresses are rich, but the pastor says that this is a misunderstanding. This is something he personally experienced when actor Ayo Emmanuel contacted him with a call for help.

“I wept when Ayo Emmanuel sent me a text a few weeks back that he was sick and needed financial assistance,” Iginla says.

The pastor, who is known for his philanthropy, decided not to sit idly by. During the Sunday service at Champions Royal Assembly at City of Wonders last week, he generously donated a brand new Peugeot 301 to the sick actor.

Emmanuel was floored by the generous surprise gift, as the picture below fittingly illustrates. 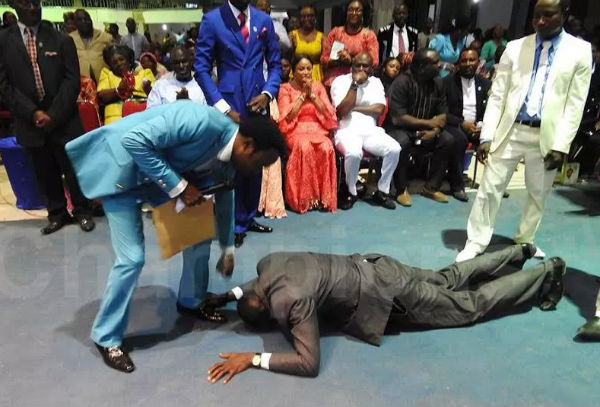 The actor reportedly suffers from “spiritual and depression” related problems. While a car might not help him to cope with these challenges, he no longer needs a bus to get to church.

A full photo-op of the giveaway ceremony was posted on the pastor’s Facebook page, including one in which Emmanuel, popularly known as “Nollywood Policeman”, poses with a handwritten sign in front of his new car. 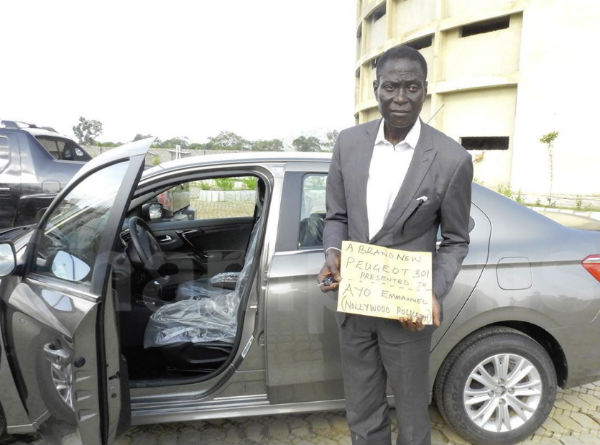 The pastor is often criticized for giving away expensive gifts while so many others don’t have enough food to feed their families. However, Iginla stresses that actors have it rough too and that it’s up to him to decide where his money is spent.

While he has helped a lot of poor people, Nollywood actors and actresses are among his favorites.

Over the past several years he has donated dozens of luxury cars to Nollywood celebrities, including a Hummer Jeep, Mercedes G-Wagon, and Mercedes CLS 550.

The fortunate pastor clearly has enough money in the bank. In addition, he’s also seen a prophet by some. In 2016 several of his “prophecies” came true, although one publication notes that he’s not always right.

How exactly he acquired his fortune remains a mystery though, just like his gift of predicting the future.