Faced with an Internet awash with copyrighted movies and music just a few clicks away, some rightsholders have decided to let piracy continue with a view to monetizing it.

One aspect of that approach is the rise of so-called John Doe lawsuits, copyright cases which target individuals said to be responsible for the unlawful sharing of content online. What copyright holders want from these people is a cash settlement, often to the tune of thousands of dollars.

Last year Matthew Sag, Professor of Law at Loyola University Chicago School of Law, published a report titled ‘IP Litigation in United States District Courts: 1994 to 2014’. It provided a review of all IP litigation in U.S. district courts over the past two decades to include copyright, patent and trademark lawsuits.

With 2016 now upon us, Professor Sag has provided an update to include stats from last year. As can be seen from the graph below, in 2010 suits against file-sharers were almost non-existent but year on year grew to dominate all copyright cases filed in the United States.

Indeed, following yet another rise in Doe cases during 2015, this year the record set by the RIAA in 2005 is at risk of being trumped. 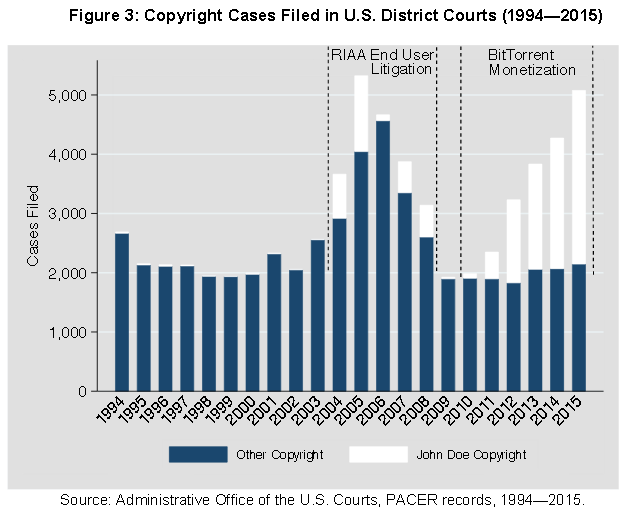 In 2015 John Doe litigation made up almost 58% of all copyright cases filed (2930 cases out of 5076) in the United States. And, in common with recent years, a tiny number of plaintiffs are driving the majority of the action.

Malibu Media accounted for 41.5% of all copyright suits filed in the United States in 2014, and just over 39% in 2015. The slight reduction in share was due to other plaintiffs filing more suits than before.

While Malibu Media’s overall share is impressive, their lawyer Michael Keith Lipscomb is involved in an even greater number of cases.

“Lipscomb also represents two of the other plaintiffs on the top five list for last year — Manny Film and Plastic The Movie Limited — as well as two of the top five from 2014 — Good Man Productions, Inc. and Poplar Oaks, Inc,” the report notes.

This consolidation of legal resources suggests a more cost-effective approach to the volume trolling process. Indeed, considering the number of cases now being filed an industrial approach to the business is almost certainly required.

As column two in the table below shows, there has been a dramatic increase in the number of John Doe suits filed in the past five years, from 77 in 2010 to a staggering 2930 in 2015.

However, the massive number of suits filed has not resulted in an exponential growth in file-sharers being targeted, quite the opposite in fact. In 2010 a total of 43,124 ISP account holders were targeted in John Doe lawsuits yet last year that had dropped 84% to ‘just’ 6,700.

The report concludes that this fall is a symptom of increasing intolerance by courts towards single cases that target huge numbers of anonymous file-sharers.

“Filing suits [against thousands of IP addresses] enabled plaintiffs to economize on filing fees but courts have become significantly more skeptical of the legality and desirability of mass joinder in BitTorrent cases. Based on the data from 2015, it seems that the era of mass joinder is almost completely over.”

Nevertheless, by now it’s clear that copyright trolling is all about monetization of BitTorrent piracy and the report notes that despite having to file thousands more cases, the business model is still proving profitable for the plaintiffs.

“The filing fee for opening civil action in US district courts is now $400, so that means that plaintiffs associated with Mr Lipscomb have paid at least $936,800 in filing fees over the last year. Given the scale of this enterprise it seems reasonable to infer that Lipscomb and his clients have found a way to effectively monetize online infringement,” the report concludes. 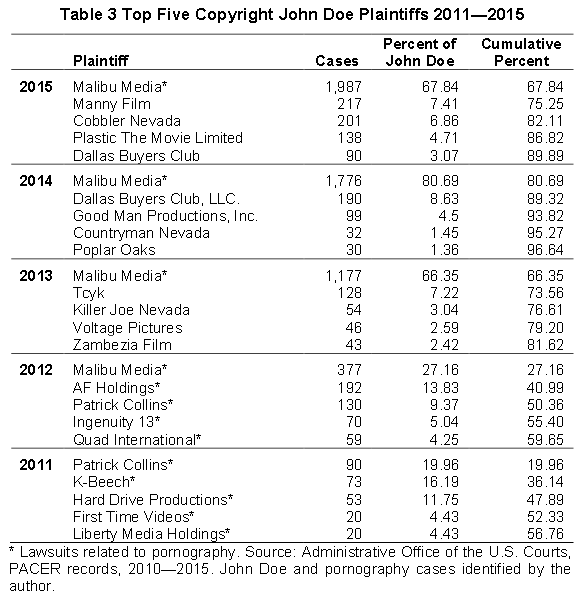 The report can be downloaded here.