Piracy is a complicated phenomenon and the reported effects on legal consumption are not always straightforward.

The issue has been researched extensively with both positive and negative effects being reported, often varying based on the type of content studied.

A new academic study published in the “Information & Management” journal adds another piece to the puzzle. Together with two colleagues, Korean researcher Dongyeon Kim studied how online piracy affects legitimate viewership and how “Internet buzz” mediates this impact.

Specifically, the researchers tracked BitTorrent downloads and analyzed how they impacted legitimate viewership of several top TV shows in the United States. The sample, taken in 2018, consists of 20 TV shows in total, including the popular titles Arrow, Lucifer, Supernatural, The Blacklist, and The Flash.

The researchers then looked at Google, Twitter, and YouTube activity to see how piracy affected the online “buzz” for these shows and how that impacted the legitimate viewership.

On a basic level, the results are in line with what most piracy skeptics would assume. More piracy leads to fewer legitimate viewers, suggesting that piracy has a detrimental effect on revenues. However, that’s not the full picture.

The researchers also found that piracy increases “Internet buzz” which in turn increases the viewership of the TV shows. Following a mediation analysis, they conclude that the negative effect of piracy is significantly decreased by the extra attention.

“We show that although the direct effect of media consumption through BitTorrent to TV viewership is negative, the indirect effect that mediates Internet buzz is positive, which dilutes the negative effect of digital piracy,” the researchers write. 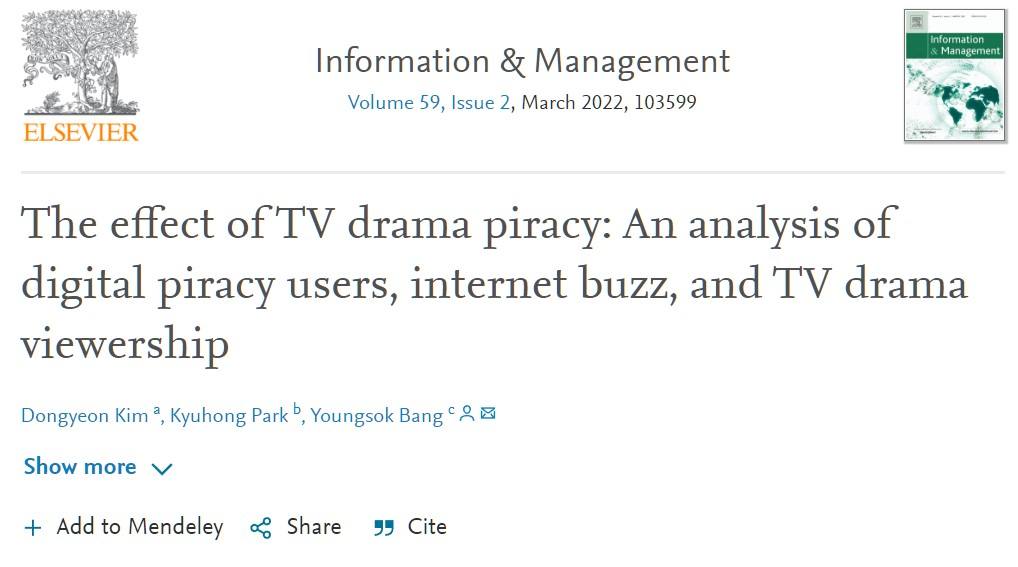 Further analysis reveals that this mediating effect is the strongest for less popular shows, which benefit more from the online buzz. In addition, the effect is stronger during the second half of a season.

The latter point is worth zooming in on. The findings show that the online buzz generated by piracy doesn’t really have much of an effect on earlier episodes. However, it was clearly visible later on.

In fact, when the mediation effect of online buzz is taken into account, piracy has a positive effect on legitimate viewership in some cases.

“The mediating effect was negligible for episodes in the first half, such that the negative effect of digital piracy prevailed during the first half. The mediating effect of Internet buzz was significant in the second half, thereby diluting the negative effect of digital piracy, and even creating an overall positive piracy effect for TV ratings,” the researchers write.

All in all, the research shows that TV piracy can generate significant online “buzz” which, in some cases, may lead to more viewers.

This is a controversial take in Hollywood but it’s not completely alien. Almost ten years ago, Game of Thrones director David Petrarca suggested that piracy helped to create “cultural buzz” around the series, which could eventually boost the number of HBO subscriptions.

A copy of the Information & Management paper titled “The effect of TV drama piracy: An analysis of digital piracy users, internet buzz, and TV drama viewership” is available on Sciencedirect, behind a paywall.