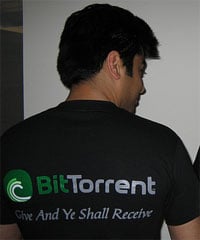 Navin, who stays involved with BitTorrent as a board member, will start a new venture with a couple of friends including YouTube’s Steve Chen. Their goal is to support new tech startups in the San Fransisco area, and provide them with office space where they can work on their ideas.

His position as president of BitTorrent never held Navin back much. With quotes such as “iTunes DRM Inspires People to Pirate Content,” he was very clear about his attitude towards digital rights management for example. Still, he often found himself in an awkward position, where he had to please the average BitTorrent user, but also the big Hollywood studios.

Now Navin has quit his job at BitTorrent Inc, we decided to do an exit interview, hoping he can speak a little more freely. “My BitTorrent tenure certainly didn’t feel like four years,” was the first thing Navin told TorrentFreak. “But time flies when working among good people, world-changing ideas, and great fun! What attracted me to BitTorrent in the first place, and what is still inspiring to this day, is its ability to provide people true digital freedom.”

“For its direct and indirect benefits, I believe BitTorrent sits among the handful of important technology breakthroughs such as the printing press, broadcasting, and the Internet itself. Why? Today’s publishing technology – like blogs, BitTorrent, and video sharing sites for example – quite directly forge a level playing field for creativity,” Navin said.

“Indirectly, these tools force large media companies to realize that there is no longer scarcity or a stranglehold on distribution that locks people out of self-expression. Anyone can speak to the world in any format, without filters. Freedom of Speech has never been so available to the masses. How these large corporations respond to this fundamental realization will benefit many many millions of people–creators and consumers alike.”

Navin hits the nail on the head here. BitTorrent is a great technology with a lot of potential. The thing the entertainment industry has to do, is find a way to leverage it. Listening to consumers instead of trying to shut them up would be a good place to start. The Internet has put the consumer in control, and it’s time for the copyright holders to realize this. Or as Navin puts it:

“The free flow of information and entertainment over the Internet doesn’t diminish the relevance of high value, professional entertainment at all. It does force the publishers to be more quality conscious (make fewer flops, and more hits). And the great cardinal sin in this era would be to withhold your content in exclusive deals or to be too precious with your creation. Now’s the time to be more promiscuous with your distribution strategy than before: be everywhere at once, wherever there are eyeballs you can count.”

“In the previous era, there was a lot of forgiveness when 3 or 4 companies owned every road to the consumer. Publishers could produce a crap movie or TV show and get away with it. But when there are millions of ways to get to the user, or in other words, millions of “channels” to choose from, the best entertainment presented in the most frictionless format always wins.”

So, Navin argues that piracy leads to less crap. The entertainment business now has to make stuff people actually want to listen to or watch. Unfortunately for them, it is getting harder and harder to influence and direct consumers to see things the way they want to. Information is more free than ever before and consumers have a choice now, and that will not go away. It’s up to Hollywood to take the next step, and compete with piracy.

uTorrent Takes on the BitTorrent Scammers

BitTorrent Store to Compete with Apple, Microsoft and Piracy

BitTorrent Video Store to be Infected with Windows DRM