Assisted by police in France and the Netherlands, the FBI took down the “pirate” Android stores Appbucket, Applanet, and SnappzMarket during the summer of 2012.

During the years that followed several people connected to the Android app sites were arrested and indicted. Most cases are still pending, but this week one of the operators of SnappzMarket was convicted.

The now 26-year-old Joshua Taylor, a resident of Kentwood, Michigan, was convicted of conspiracy to commit criminal copyright infringement during a bench trial this week.

Taylor’s attorney had filed a motion to dismiss the case, claiming that the indictment was inadequate and unclear, but U.S. District Judge Timothy Batten Sr. denied this request.

Taylor was found guilty instead and now awaits his sentencing, which is scheduled to take place February next year. 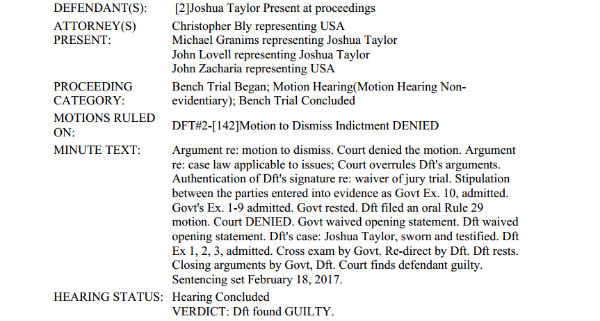 The Department of Justice (DoJ) is pleased with the guilty verdict. They note that Taylor and his co-conspirators distributed more than a million apps without permission from the copyright holders, causing significant losses.

“The total retail value of the more than one million pirated apps distributed by the SnappzMarket Group was estimated to have been more than $1.7 million, according to evidence presented at previous court proceedings,” DoF notes.

Two other co-conspirators, Jon Peterson Gary Edwin Sharp II, previously pleaded guilty and will be sentenced at a later date as well. The three all face up to several years in prison.

This summer, SnappzMarket’s ‘PR manager’ Scott Walton was the first of the group to receive his sentence. He was convicted to 46 months in prison for conspiracy to commit copyright infringement.