For more than 15 years, most piracy headlines in Sweden had some connection to The Pirate Bay.

Perhaps anti-piracy groups grew tired of chasing and then the media moved on, but today it’s barely mentioned, despite providing the same functionality as it ever has. Web-based streaming sites have been relegated too, largely thanks to a newer scourge – pirate IPTV services.

Responsibility for tackling pirate IPTV in Sweden falls to anti-piracy group Rights Alliance. Their recent successes include a four-month suspended sentence and $164K in damages against a subscription reseller, and 140 hours of community service and $231,000 in damages against another reseller.

A new prosecution in Sweden looks set to continue the trend.

Rights Alliance says that a trial recently took place at the specialist Patent and Market Court in Stockholm. A man and woman, a couple from Eskilstuna in eastern Sweden, faced accusations of running an illegal IPTV business and laundering the proceeds.

According to Rights Alliance, the man is suspected of “running two different IPTV services” which together generated around SEK 2.3 million (around US$213.2k) in revenues over an unspecified period.

The woman claimed to have no idea that her partner was in the piracy business – according to her, he was a set-top box repairman. Misunderstandings aside, Rights Alliance says that SEK 1.3 million (around US$120.5k) was funneled to the woman from IPTV-related sales. As a result, she now faces money laundering charges.

Rights Alliance says that after discovering “two IPTV services” and reporting them to the police, subsequent investigations linked them to the same illegal activities. According to a report from Ekuriren (paywall), the investigation began in 2020 and was handled by Sweden’s National Operations Department (NOA).

NOA identified an Eskilstuna man in his 40s as the suspect and inevitably paid him a surprise home visit. A police photograph shows a cardboard box containing several smaller boxes, that in turn may have contained Linux-based set-top boxes. A couple of remotes (soiled), and other sundry items complete the haul. 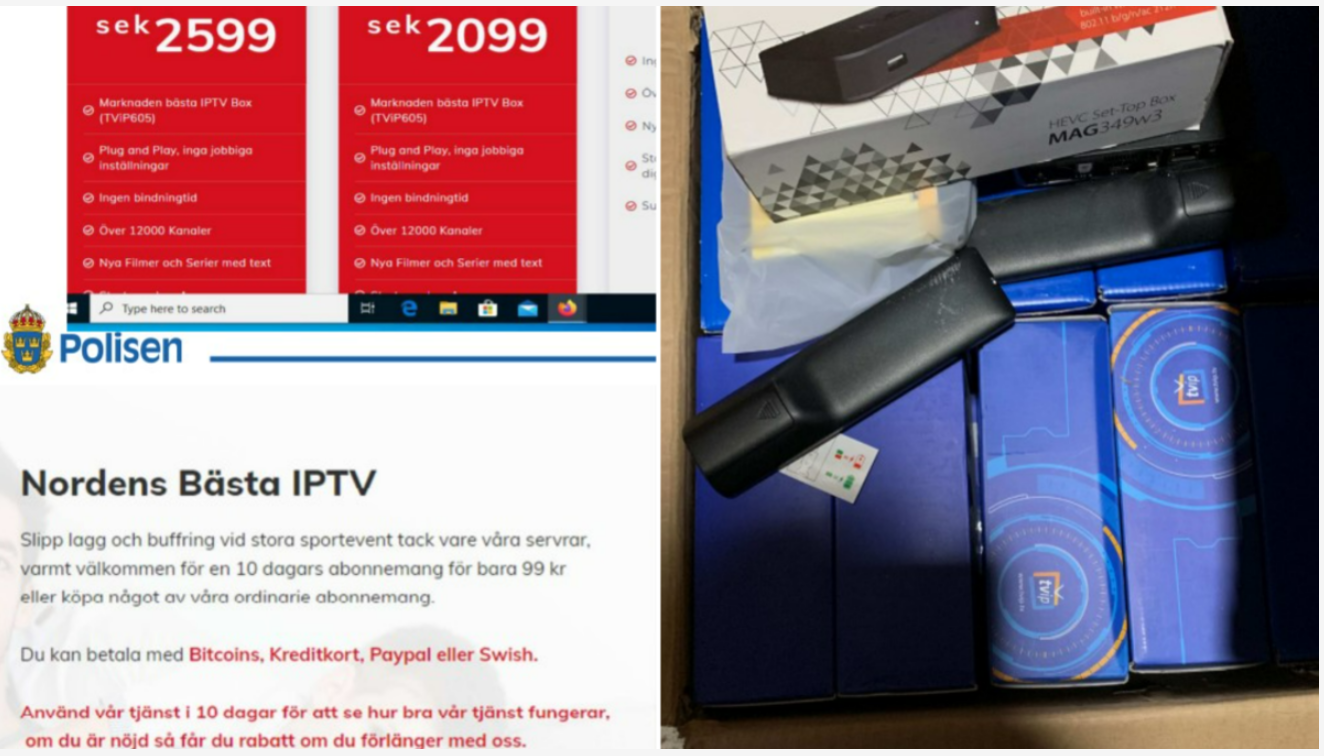 Police found customer lists connecting the man to sales of IPTV subscriptions, most likely providing access to thousands of live TV channels and movies. The man also sent close to 1,400 packages through the mail, other documents reveal.

For potential buyers lacking specific knowledge, it can be challenging to know the nature of the person selling them an IPTV subscription. Users can buy subscriptions directly from those operating IPTV services but in most cases, they will be dealing with a reseller operating their own branded website.

Resellers’ connections to those actually operating IPTV services (servers and other infrastructure) are mostly limited to buying ‘credits’ from a self-serve web service at one price, and then reselling them to customers under their own branding, hopefully at a higher price.

These differences don’t matter much to the customer, but they are important when reporting cases. They’re important to suspects in those cases too, and crucial to the wider fight against piracy.

In the Swedish case targeting the man and his partner, Rights Alliance says he is charged with “running two different IPTV services”. According to the Ekuriren report, the investigation shows that he mainly sold set-top boxes. It’s acknowledged that the man ran two websites and received payments, but a cardboard box of set-top boxes isn’t an IPTV service.

Language barriers and terminology preferences may be at play, but the difference between prosecuting someone behind an IPTV service and prosecuting a reseller of someone else’s service is significant. If prosecuting the operator of a service means that the service gets shut down, all resellers of that service have nothing further to sell. It tackles the problem at the source and causes much more disruption.

Prosecuting a single reseller not only means the underlying service continues, but all other resellers still have access to subscriptions that can be sold to the public. That doesn’t mean that prosecuting resellers is pointless but it does put a lot of faith in deterrent messages. These already face fierce competition from the small chance of being caught to the considerable profits available.

Of course, IPTV sellers of all kinds prefer to hang on to those profits and that’s not going to happen in this case.

In addition to the seizure of around SEK 1.3 million (around US$92.7k), police also seized a Tesla. There’s also the potential for damages and prison sentences, with the length of the latter likely to be affected by the man’s status as a ringleader (the operator of a service) or just a cog in the machine (reseller).