Online piracy is taking place in all corners of the Internet, Facebook included.

This issue is not limited to users who upload or stream infringing content. It also extends to Facebook’s marketplace, where vendors sell pirate streaming boxes and IPTV subscriptions.

Facebook is actively cracking down on these activities. Most recently the company updated its commerce policies to make clear that all streaming devices that use Kodi software are now banned, whether they are infringing or not.

Copyright holders, meanwhile, are not sitting still either. Earlier this month, Sky booked a success in the Court of Session in Edinburgh, which ordered Facebook seller Luke Skinner to pay £50,000 in damages.

Skinner, a resident of Burntisland, sold pre-loaded Openbox VX and VX2 boxes on the social media network, as well as access to IPTV subscriptions. These allowed his customers to access unauthorized Sky channels for £35 per year, or £75/£85 for a two year deal with the box included. 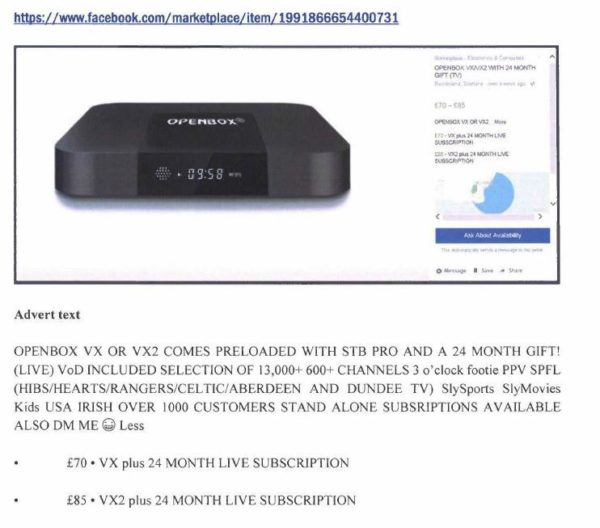 In addition to the damages award, the Court of Session also issued an injunction which prevents the man from selling or advertising any infringing streaming devices or subscriptions going forward.

Sky is pleased with the outcome of the case and hopes that it will deter others from engaging in similar activities.

“Those who infringe copyrighted content do so at their own risk. This case is another example of the heavy price people who facilitate piracy can pay,” Matthew Hibbert, Sky’s Head of Litigation, told Broadband News TV in a comment.

According to Colin Hulme, a partner at law firm Burness Paull, which has experience with these cases, there is little doubt that selling pre-loaded devices or pirate subscriptions is against the law.

And misspelling SkySports as SlySports is not going to help much to stay out of trouble, as this case shows.

“Without question, subscription services and pre-loaded devices that give unauthorized access to copyrighted content are illegal. Sellers misspell brand names to avoid the safeguards that protect content from being pirated but this case proves that they can still be detected,” Hulme commented.

The present case is, to our knowledge, the first private prosecution of a UK seller of pirate tools and IPTV services on Facebook. It is not the first IPTV related conviction in the UK though, and it likely won’t be the last.