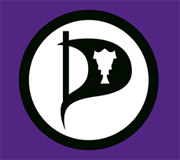 Founded in 2006 by Rick Falkvinge, the Pirate party movement has scored some significant victories over the years.

The greatest success is the continuing presence in the European Parliament, but in Iceland the local Pirate Party is writing history as well.

The Pirates have a great track record in Iceland already, with three members in the national Parliament. However, many more may join in the future as the Pirates have become the largest political party in the polls.

Earlier this year we already reported on this remarkable achievement. At the time the Pirate Party had 23.9% of the polled votes, a number that has now grown to 34.2% in the last MMR survey.

According to the most recent polls the Pirate Party now has more support than the local coalition Government, which consists of the Independence Party (21.7%) and Progressive Party (10.4%). 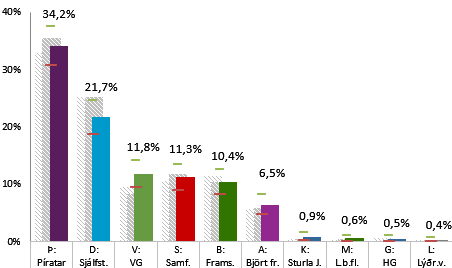 The continued rise is quite a success for a party that was founded just three years ago, and for now the upward trend continues.

TF spoke with Ásta Helgadóttir, Member of Parliament for the Icelandic Pirate Party, who believes that many people are fed up with the current state of politics.

“I believe people are tired of the old fashioned politics the old parties are practicing,” she says.

“We have been focusing on making decisions based on evidence, being honest when we make mistakes and ready to change our minds if that is needed. We have also been working on changing the system from within and demanding that the people in position of power are responsible for their actions.”

Unlike some outsiders believe, the Pirates are not a one issue party. The party is known to fight against increased censorship and protect freedom of speech, but also encourages transparency and involvement of citizens in political issues.

“We are working on taking our democratic system into the 21st century,” Ásta says. “The division between the executive and legislative should be much clearer than it is today, as ministers can and most often are also members of parliament now.”

This is just one of the many ideas the party is working on. While the current poll results are promising, it has to hold these for a while as the next elections are scheduled in 2017.

While the Pirate Party may be more popular than the current government at the moment, it doesn’t mean that governing is a main goal. The Pirates just want to make sure that the status quo changes.

“We don’t really want to govern, but rather have the system working as a whole where everyone in it has responsibility for their actions.”

“I don’t know how realistic it is that we’ll form a government, only time will tell,” she concludes.