Following a series of High Court orders, six UK ISPs are required to block subscriber access to so-called “pirate” sites, including The Pirate Bay and KickassTorrents.

The latest orders were announced last week and require that ISPs block an additional 23 sites. This brings the total number of blocked sites to 93 and the end is not yet in sight.

In a response to the blocking bonanza BT decided to follow in the footsteps of Sky by listing a complete overview of all sites censored following requests from the movie and music industries.

BT subscribers who now try to access one of the blocked domains are redirected to ukispcourtorders.co.uk which offers a full rundown of the court orders. In addition, BT informs its subscribers that the High Court decisions can be challenged.

“You have the right to apply to the High Court to vary or discharge the Orders below if you are affected by the blocks which have been imposed,” BT writes, adding that potential appellants should direct their requests to the UK High Court. 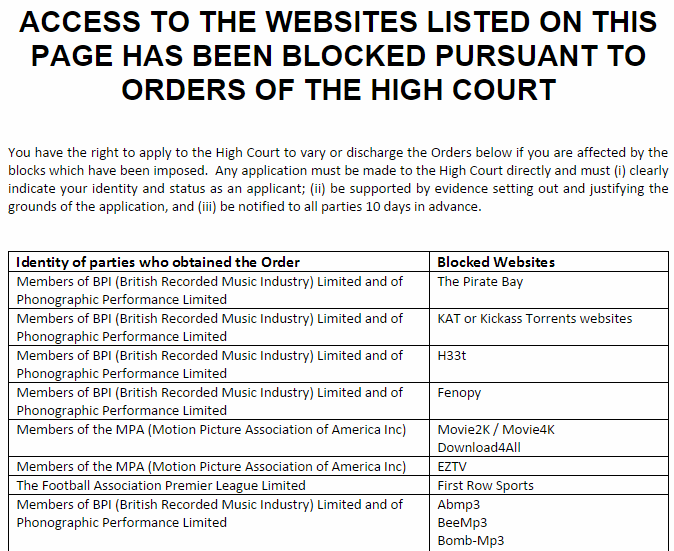 While it’s unlikely that individual subscribers will be successful in getting a blockade lifted, the affected sites may have more success.

Earlier this week FilesTube transformed its site from a file-host search engine into a licensed movie portal. As a result it can no longer be seen as a “pirate” site, but the UK block remains in place.

TF contacted the FilesTube team who told us that they will take up BT’s advice and file a request for their site to be whitelisted.

“We are currently preparing to challenge the blockade at the High Court. Hopefully FilesTube will be available again to all UK Internet subscribers in the near future,” a FilesTube spokesperson says.

BT, meanwhile, is unlikely to appeal any of the blockades itself. The Internet provider previously fought and lost a similar case against the MPA in 2011, and stopped protesting subsequent blocking requests made on copyright grounds.