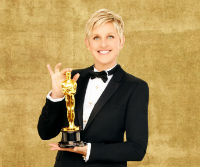 Over the past few weeks dozens of DVD screeners have leaked onto the Internet. This happens every year around the holiday season, when movie studios send out their entries for various awards, the Oscars included.

The pirated screeners are a thorn in the side of Hollywood, and over the years the movie studios have implemented strict security procedures to prevent leaks. These efforts have been moderately successful, but the problem remains.

Yesterday a pirated screener copy of The Secret Life of Walter Mitty leaked onto the internet via various BitTorrent sites. While this isn’t something out of the ordinary, the fact that the screener displays a watermark with a Hollywood star’s name on it is quite unique.

The pirated copy in question is linked to Ellen DeGeneres, which is all the more painful, since she is the host for the upcoming 2014 Oscars.

As can be seen below, the leaked screener clearly lists DeGeneres’ name, suggesting that the DVD was sent to her in November. The watermark is displayed right after the opening credits, around the one minute mark.

While it’s technically possible that someone edited the screener to implicate DeGeneres, this seems unlikely. All copies of the screener that are circulating on the Internet include the same watermark, suggesting that they came from the same source.

Thus far, there has been plenty of interest in the pirated screener. Data gathered by TorrentFreak suggests that within 24 hours of its release, an estimated 250,000 copies have been already been downloaded , all with DeGeneres’ name on it.

Neither Ellen DeGeneres nor Fox have commented on the leak thus far, and it also remains unclear what the screener was intended for.

Andy Baio suggests that it could be connected to Ben Stiller’s appearance on the Ellen DeGeneres show early December, for which she may have received an advance copy of the film.

This is not the first time that a celebrity has been linked to a leaked DVD screener. In 2011 a pirated copy of the Steven Spielberg movie ‘Super 8′ surfaced online with Howard Stern’s name all over it. This leak made plenty of headlines, but as far as we know Stern nor his colleagues were never investigated.

For Ellen DeGeneres the leak may perhaps serve as inspiration for a piracy joke or two at the Oscars ceremony later this year. That is, if she’s not in jail by then.

Update: Twentieth Century Fox confirmed that the copy was sent to the Ellen DeGeneres show.