Back in September we reported on Mulve, a fairly new and impressive application to help users download music. With a claimed database of 10,000,000 tracks and high quality results, Mulve certainly turned heads.

After news of Mulve travelled quickly around the world, the site went offline, unable to cope with the demand.

After an upgrade the site returned, only to disappear again a short time later. This time it wasn’t due to excessive demand, but due to the lawyers at the RIAA.

Mulve, which is an abbreviation for ‘Music Love’, came back online, but the return was short-lived. This week the site disappeared and software stopped functioning again, but under entirely more ominous circumstances.

From speaking with the operators of Mulve, TorrentFreak has learned that police in the UK made arrests in connection with the site a few days ago. We are aware of the grounds for arrest but until the Mulve guys can get their bearings and attempt to come to terms with what has happened, that information will have to wait until another day.

What we can give, however, is our opinion. And our opinion is this. Regardless of what people may have used chosen to use Mulve for, its creators simply cannot be held liable for that. To bring criminal action against them seems utterly absurd.

Mulve was simply a search engine. It did not organize music in any way other than returning results based on user searches. Mulve hosted no music on its servers, but instead pulled it from hardware owned by Vkontakte, Russia’s biggest social networking site.

Is Mulve alone in this respect? Absolutely not. In fact, to find a similar piece of software one needs to look no further than Apple’s App Store.

VKontakte Music is available there for the princely sum of ‘FREE’ (Pro version $0.99) and the only additional requirement is a login for Vkontakte which requires Google translate, an email address and 5 minutes of a user’s time. 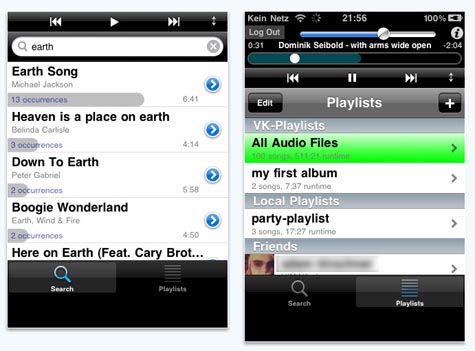 As can be seen from the screenshot above taken from iTunes itself, this app even shows copyright songs as examples of items for download. Mulve never even went that far so for the police to get involved seems nothing short of ridiculous.

After the failure to convict the operator of OiNK, stand by for another major embarrassment in the UK. This time the case is even more weak.

Mulve’s code has been released and will live on, no matter what happens.

“Just letting you know that following arrests, we have decided to take Mulve offline for good. We do not want to fight this,” Mulve told TorrentFreak.

“Hell, I am not prepared to spend the next 5 years in prison for a project that was simply meant to be a little bit of fun. We would like to apologise to all those who were affected by this.”

TorrentFreak also learned that the arrested guy wasn’t actually involved in the programming of the application but since it’s believed he made the video demo the authorities have put two and two together to arrive at the outcome detailed above.

One thing is clear in all of this though, Mulve is never coming back.