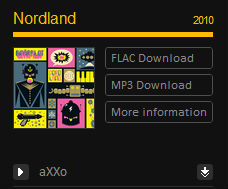 For all those who visited a BitTorrent site prior to 2010, the name aXXo probably rings a bell. Since the fall of 2005, those four iconic letters have been attached to hundreds of torrent files that linked to pirated movies.

In the years that followed the aXXo brand went on to achieve cult status. For many it became synonymous with quality, dominating the searches on all public torrent sites. As a result, aXXo has grabbed the attention of scammers, the mainstream press and even documentary makers.

For reasons unknown, aXXo stopped uploading torrent files to the usual places in March 2009, leaving millions of desperate followers behind. One of the people who appreciated aXXo’s contributions is Alexander Støver, a Norwegian musician who produces electro under the name Binärpilot.

In a newly released album, Binärpilot has dedicated the first track to mourn aXXo’s absence with the following lyrics:

Where have you gone?
You had become such a good friend
Don’t take too long
To come back home
Come back home

In true aXXo spirit, the track and the entire album can be downloaded for free of course. This is the business model Binärpilot has embraced since he started making music. Instead of asking people to pay for his music, he makes money through donations, bookings and merchandise.

Aside from publicly showing his appreciation for a DVD-ripper like aXXo, Alexander has been very vocal about how piracy is affecting the music industry.

“I’ll sum it up for you,” he wrote in a blog post on the topic. “It’s not hurting the artists, it’s hurting the industry behind the artists. And that is, in my opinion, the beauty of it; Contrary to what they want you to believe, piracy is (if anything) saving music, because it’s bringing a corrupt and exploitative machine down to its knees.”

As an artist, Alexander personally has very little to worry about illegal downloads, since he’s not charging for his music in the first place. Instead of complaining about the lack of income from music sales, he attributes most of his success to the people who are sharing his work for free.

“I’ve never charged a dime for any of my music, but thanks to the internet I’m making a fair amount of money through donations and ad revenue. Money I never would have seen if it wasn’t for so-called pirates downloading and uploading my music,” Alexander says.

“And most important of all, this is money I can spend with a clear conscience, knowing I never sacrificed my artistic integrity to fit some sort of corporate formula. Now, I’m not making a living with my music, and with the status quo I don’t think I ever will, but that’s not because of pirates, and it never will be. In fact, I salute them.”

Binärpilot’s latest album Nordland, including the track aXXo, can be downloaded for free on his official website. If you like it, please consider chipping in a few bucks so he can buy some bread.

Axxo Returns to Mininova, Or Does He?