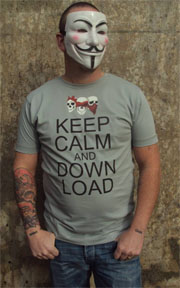 The labels are impressed with Sweden’s performance and are now called upon by counterparts worldwide to tell the story of how they pulled off this feat in the spiritual home of The Pirate Bay.

But despite this great performance the pressure mounts. Attacks on file-sharers and operators of file-sharing sites are a regular occurrence in this Scandinavian country of 9.5 million, even though the population is clearly supporting the entertainment industry.

Earlier this week, charges against a prolific torrent site uploader were made public and today there’s news of another significant arrest against an administrator of Tankefetast, Sweden’s #2 torrent site.

The admin, known online as Freke, was raided by police on Monday at 06:30.

“Come with me to the police station or accept the consequences,” the police told Freke, as reported by his girlfriend. Barely awake, Freke was taken away by a waiting police car.

“They put me in a room where I had to wait to be questioned,” Freke said following his release.

“I asked them to get me my lawyer, which they suggested that I did not have to, but I insisted. When the lawyer arrived after an hour or so they started to ask the questions,” he adds.

Reporting on Freke’s release from custody, Tankafetast staff confirmed that the admin had indeed been arrested due to his connections with the site. However, they note that his arrest was unusual since no evidence was seized during the raid.

This week’s arrest marks another setback for Tankafetast. During the early days of October 2012 police raided PRQ, a so-called “bulletproof” webhost previously owned by Pirate Bay co-founder Gottfrid Svartholm. It was later revealed that Tankafetast was the primary target.

The site disappeared offline but just three weeks later it was back and making a point of taunting local anti-piracy groups with a new clothing range and the hiring of local cinemas.

But despite their obvious dislike of groups such as Rättighetsalliansen (Rights Alliance, previously Antipiratbyran), Tankafetast have gone public with their defense of the police.

“They’re just contractors and in such cases commissioned by other agencies / authorities. It’s like when the carpenter comes to my home to build a patio for me,” the site notes on their Facebook page.

“There are politicians who create laws together with the officials who work in government and so on. This is where the need for change is the priority. Please do not pick on the police when they do their job,” they add.

“We are and will remain here,” the site’s operators conclude.