In 2008, File.lv, Latvia’s largest BitTorrent community at the time, was taken offline. The 100,000 member tracker was shuttered following action by the Latvian Economic Police and the IFPI-affiliated Latvian Music Producers Association, otherwise known as LAmpA.

At the same time another site called Advbt.lv was targeted. Its owner, Tom Litovnieks, was arrested and a criminal case brought was against him. With Advbt.lv operating under the new name Torrenti.lv, two years later Litovnieks appeared in court and was found not guilty.

However, celebrations were short-lived when it became apparent that the authorities wanted a another chance at victory. A second criminal case had already been initiated against Litovnieks. The general details and allegations were the same, but with enough change to be deemed a new case.

In the meantime Torrenti.lv grew to become Latvia’s biggest torrent site. From a local population of around 2 million the site received 1.7 million unique visitors last year, an effort which made the torrent site the country’s 249th most popular site overall. 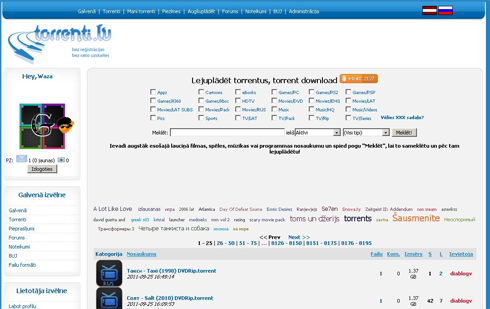 “Last week, Latvian Economic Police entered my home and three guys from the police attacked me while I was handcuffed which resulted in a concussion,” Litovnieks told TorrentFreak.

“There were many laws that were ignored during the raid and the police explained to me that I am a suspect now and I have no rights at all.”

In response Lativa’s national police chief says it is one of ENAP’s responsibilities to crack down on copyright infringement and “illicit traffic” on the Internet. Rightsholders claim that the site has cost them close to $3.8 million in lost sales.

In common with recent actions in file-sharing cases elsewhere it was not Litovnieks’ site that was targeted but its domain.

“The police believe that the Torrenti.lv domain name is illegal and it has been seized,” Litovnieks explained. “I am not talking about the site itself, it is just the domain name they have seized. They believe that through this seizure it will be possible to stop piracy in Latvia.”

If the authorities do indeed believe that, they appear to be mistaken. Torrent.lv’s code was published online for free and while its domain is now dead, the site has already been replaced. Litovnieks used the new domain to argue that Torrenti.lv complied with takedown requests.

“Here is the funny thing – there is a new site that popped up on the internet that looks just like torrenti.lv and has all the info torrenti.lv had, so I will use a link from the clone site to describe my point,” he explained.

“Unlike The Pirate Bay, Torrenti.lv deleted content upon receipt of DMCA notices, there is even a list of files that were taken down. I showed this to the police, but they don’t care, they think the domain name is illegal, they can shut it down, even if last time they could not prove that,” he adds.

In a closing message to former site members, Litovnieks offers the following reassurance.

“Site users should not be worried because all users’ IP addresses were accidentally deleted. It must be the concussion that resulted in this mistake while I was editing the database,” he concludes.