The Popcorn Time phenomenon is one of the biggest piracy stories of the year thus far.

The software became an instant hit by offering BitTorrent-powered streaming in an easy-to-use Netflix-style interface.

While the original app was shut down by the developers after a few weeks, the project was quickly picked up by others. This resulted in several popular forks that have gained millions of users in recent months.

Today one of the most popular Popcorn Time forks releases a highly anticipated feature. The developers inform TorrentFreak that the latest version now has Airplay support, making it possible to stream movies directly to Apple TVs and other supported devices.

Ironically, Airplay support is currently limited to the Windows release, but a Mac version is due early next week and the Linux release will follow shortly after.

The latest feature follows the addition of Chromecast support a few weeks ago, but this is by no means the last planned development. 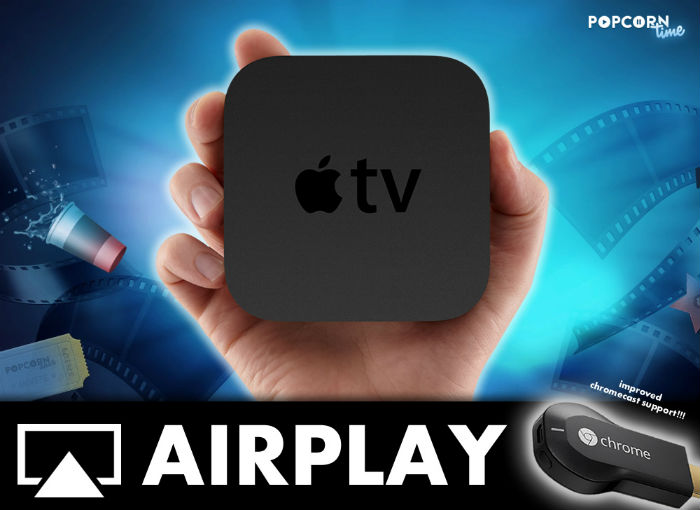 Looking ahead the developers hope to bring the Popcorn Time experience to as many operating systems and devices as possible.

“Our ultimate goal is to bring Popcorn Time to every platform, operating system and device that can play videos, so Airplay is one particle of a huge revolution we’re making to the torrents and movies world online,” the time4popcorn.eu team told us.

“This is only the beginning… You know us, we have many more surprises coming your way,” they add.

One of the “surprises” is a native iOS app. Although it probably won’t be featured in Apple’s App Store anytime soon, Popcorn Time will be available on jailbroken iPhones and iPads in the near future.

“Support for iOS devices will be ready in August. It’s already working in our development environment and it’s looking beautiful,” the team notes.

Popcorn Time’s popularity hasn’t gone unnoticed by Hollywood. A few weeks ago the MPAA pushed back and managed to get two popular forks removed from Github claiming that the apps are hurting the major movie studios.

While this was a setback, it doesn’t seem to have hindered development much. Both Popcorn Time forks are still around and new features are being rolled out faster than ever.