Through a series of warnings suspected pirates are informed that their connections are being used to share copyrighted material without permission, and told where they can find legal alternatives.

These efforts are part of the Copyright Alert System which is headed by the Center for Copyright Information (CCI). The goal of this voluntary partnership is to educate the public and point alleged pirates to legal alternatives.

While it’s known that the costs of the program are split between the copyright holders and Internet providers, CCI has been reluctant to share any financial details. Luckily the IRS provides some insight on this front.

TorrentFreak obtained the most recent tax filing of the six-strikes outfit which covers the company’s operations between July 1, 2012 and June 30, 2013. The document reveals that the program cost nearly $3 million during that period.

To put this figure in perspective, the CCI previously reported that 1.3 million notices were sent out during the first 10 months. This means that the cost per notice translates to roughly $2, which is rather high. 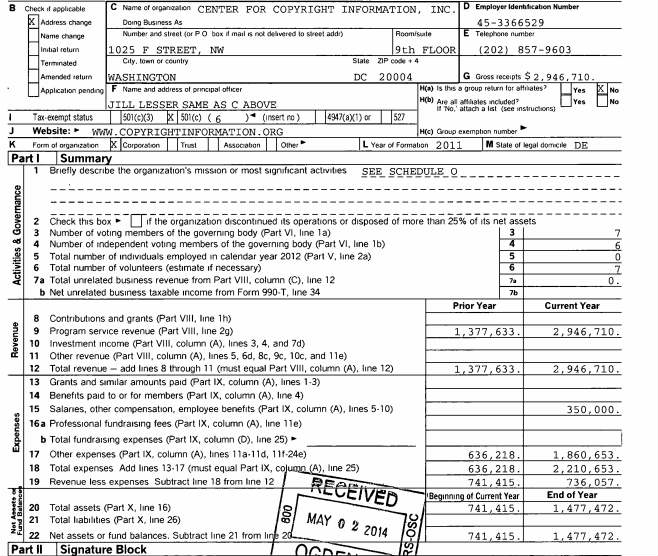 Looking at how the money is spent we see that the only paid employee, CCI Executive Director Jill Lesser, received $320,000 in compensation. Another $350,000 went to Lesser’s consulting firm, JAL Consulting, which was hired as an independent contractor.

The RIAA’s former lobbying firm Stroz Friedberg received $420,000 for the independent expert analysis of the evidence gathering technology behind the project. After we uncovered the RIAA ties CCI later hired a second independent expert, but the results of this do-over have yet to be published.

The largest independent contractor is the Glover Park Group, who handle CCI’s communication. They received more than $680,000 over the reported period. American Arbitration, who handle the appeals of people who claim to be wrongly accused, was paid $245,000 for its services.

It’s worth noting that the costs for the Internet providers are higher than the amount they pay to the CCI. The ISPs also spend money on the technical setup that’s required to handle the Copyright Alerts as well as extra customer support.

It will be interesting to see how these costs develop over the years. CCI previously announced that more Copyright Alerts would be sent out this year, so it’s expected that the average of $2 per warning will eventually reduce.

Whether the copyright holders will ever be able to recoup their investments remains to be seen.