When discussing the most influential websites on the planet, there can be little doubt that YouTube is a true giant. The video-hosting platform is the second most popular site on the Internet behind its owner’s Google.com

YouTube attracts well over a billion visitors every month, with many flocking to the platform to view the original content uploaded by its army of contributors. However, with great power comes great responsibility and for YouTube that means pleasing advertisers.

As a result, YouTube has rules in place over what kind of content can be monetized, something which caused a huge backlash recently.

In a nutshell, if you don’t produce content that is almost entirely “appropriate for all audiences,” (without references to drugs, violence, and sex, for example), your content is at risk of making no money. But YouTube goes further still, by flagging “controversial or sensitive subjects and events, including subjects related to war, political conflicts, natural disasters and tragedies.” Awkward.

Many YouTubers view this refusal to monetize content as a form of censorship but recognize that as long as they’re in bed with the company, they’re going to have to play by its rules. For some, this means assessing alternatives.

Popular YouTuber Connor Hill (Bluedrake42 – 186,600 subscribers) is no stranger to YouTube flagging his videos. As a result, he’s decided to take matters into his own hands by experimenting with WebTorrent. 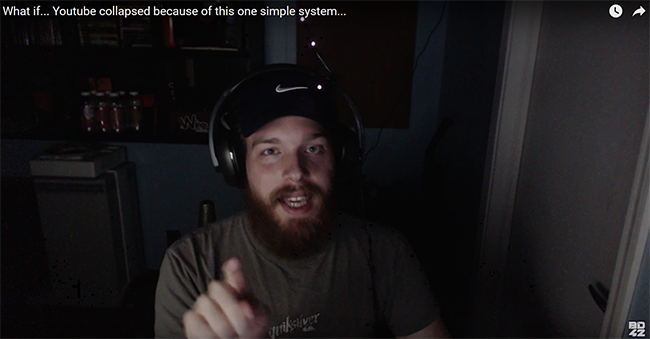 As previously reported, WebTorrent brings torrents to the web. Instead of using standalone applications it allows people to share files directly from their browser, without having to configure or install anything.

It is exactly this application for the technology that has excited Bluedrake. By taking his content, embedding it in his website, and using his own fans for distribution, Bluedrake says he can take back control.

Of course, all torrents need seeds to ensure that older content is always available, so Bluedrake says that the servers already funded by his community will have backup copies of all videos ready to seed, whenever that’s necessary.

“That’s literally the best of both worlds. A CDN and a TVDN – a Torrent Video Distribution Network – at the same time. It will be community-funded and community supported…and then we’ll have truly censorship-free, entirely impervious video content, in a network. That gives me chills,” Bluedrake adds.

But while this solution offers the opportunity to avoid censorship, there is no intention to break the law. Bluedrake insists that the freedom of peer-to-peer will only be used for speech, not to infringe copyright.

“All I want is a site where people can say what they want. I want a site where people can operate their business without having somebody else step in and take away their content when they say something they don’t like. We’re going to host our own content distribution network within a peer-to-peer, web-socketed torrent service,” he says.

“This is just one of the extremely creative uses for WebTorrent that I’ve heard about. I’m continually amazed at what WebTorrent users are building with the open source torrent engine,” Feross informs TF.

“When a video site uses WebTorrent, visitors help to host the site’s content. The more people that use a WebTorrent-powered website, the faster and more resilient it becomes. I think that’s pretty cool. It’s something that traditional CDNs cannot offer.

“The magic of WebTorrent is that people can use it however they like. It’s not just a desktop torrent app but it’s a JavaScript library that anyone can use anywhere on the web.”

Of course, one YouTuber using the technology is a modest start but the potential is there for this to get much bigger if Bluedrake can make a success of it.

“The way that we get P2P technology to go mainstream is simple: make it easy, make it better,” Feross says.

“This is part of a larger trend of decentralized protocols replacing centralized services, as we’ve seen with Bitcoin and blockchain apps.”