Of all the anti-piracy tactics deployed over the years, the one that has proven most controversial is so-called copyright-trolling.

The idea is that rather than take content down, copyright holders make use of its online availability to watch people who are sharing that material while gathering their IP addresses.

From there it’s possible to file a lawsuit to obtain that person’s identity but these days they’re more likely to short-cut the system, by asking ISPs to forward notices with cash settlement demands attached.

When subscribers receive these demands, many feel compelled to pay. However, copyright trolls are cunning beasts, and while they initially ask for payment for a single download, they very often have several other claims up their sleeves. Once people have paid one, others come out of the woodwork.

“I’m not sleeping,” Debra told CBC. “I have depression already and this is sending me over the edge.”

If the public weren’t so fatigued by this kind of story, people in Debra’s position might get more attention and more help, but they don’t. To be absolutely brutal, the only reason why this story is getting press is due to a few factors.

On the balance of probabilities, on which these cases live or die, she sounds believable. Had she been a 20-year-old man, however, few people would believe ‘him’ and this is exactly the environment companies like Canipre, Rightscorp, and similar companies bank on.

“How long is this going to terrorize me?” Debra says. “I’m a good Canadian citizen.”

But Debra isn’t on her own and she’s positively spritely compared to Christine McMillan, who last year at the age of 86-years-old was accused of illegally downloading zombie game Metro 2033. Again, those accusations came from Canipre and while the case eventually went quiet, you can safely bet the company backed off.

So who is to blame for situations like Debra’s and Christine’s? It’s a difficult question.

Clearly, copyright holders feel they’re within their rights to try and claw back compensation for their perceived losses but they already have a legal system available to them, if they want to use it. Instead, however, in Canada they’re abusing the so-called notice-and-notice system, which requires ISPs to forward infringement notices from copyright holders to subscribers.

The government knows there is a problem. Law professor Michael Geist previously obtained a government report, which expresses concern over the practice. Its summary is shown below. 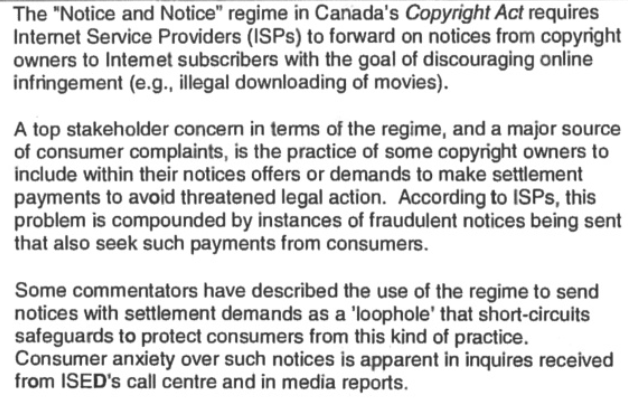 “Internet intermediaries complain…that the current legislative framework does not expressly prohibit this practice and that they feel compelled to forward on such notices to their subscribers when they receive them from copyright holders,” recent advice to the Minister of Innovation, Science and Economic Development reads.

That being said, there’s nothing stopping ISPs from passing on the educational notices as required by law but insisting that all demands for cash payments are removed. It’s a position that could even get support from the government, if enough pressure was applied.

“The sending of such notices could lead to abuses, given that consumers may be pressured into making payments even in situations where they have not engaged in any acts that violate copyright laws,” government advice notes.

Given the growing problem, it appears that ISPs have the power here so maybe it’s time they protected their customers. In the meantime, consumers have responsibilities too, not only by refraining from infringing copyright, but by becoming informed of their rights.

Hopefully, in future, people won’t have to be old or ill to receive sympathy for being wrongly accused and threatened in their own homes. But until then, people should pressure their ISPs to do more while staying informed.