The companies accused PrimeWire of encouraging users of the site to upload links to pirated content and facilitating access to those movies and TV shows via a curated index, in breach of copyright.

According to the plaintiffs, VOD services such as Disney+, HBO Max, Hulu, Netflix, Paramount+, and Peacock have been damaged by PrimeWire’s existence. As a result, they demanded millions in damages for copyright infringement and were later granted a preliminary injunction.

The injunction ordered PrimeWire to cease its illegal activities and also required domain name registrars and registries to disable three PrimeWire domains. While primewire.ag was indeed suspended, the site continued its operations using two others after they were transferred to a new registrar that took no action.

The studios then asked the court for a permanent injunction that would restrain the defendants and tackle the appearance of new domains. They also sought permission to conduct discovery on third-party companies related to PrimeWire to formulate an accurate damages claim.

While PrimeWire’s operators havent appeared in court to defend, they are aware of the complaint. In January it appeared that the site was preparing for domain seizures and taking measures to overcome them. Last week PrimeWire took further action by ‘relaunching’ via a new domain (primewire.tf) and revealing changes to the site.

“Due to recent legal action, it is possible that the current domains will be frozen or seized. To prevent the new domain from being seized, some changes will be made to the site to comply with temporary and possible future permanent injunctions,” an announcement on the site reads. 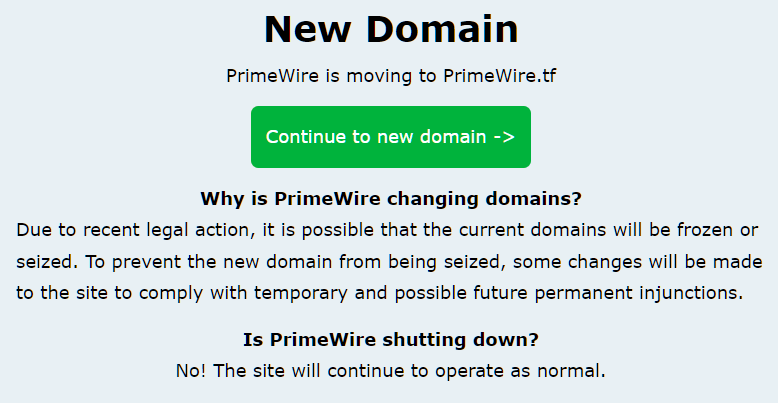 PrimeWire doesn’t implicitly state what the changes are but anyone browsing the site for content will quickly discover that all links to pirated movies and TV shows have been removed. This is an interesting move under the circumstances.

If PrimeWire is set to continue without providing links to pirated content then it’s unlikely that the site’s users will stay around for a long. A pirate streaming site without any pirated content is effectively just a site, and most pirates expect quite a bit more than movie covers, IMDb ratings, and running times.

The big question then is whether this move is permanent or simply designed to disrupt the awarding of a functional permanent injunction.

Either way, the studios have been watching developments closely. In a notice filed with the court on Saturday, they insist that it doesn’t matter whether or not there is any infringing content on the new domain, they are still entitled to an injunction, including against the new PrimeWire domain.

According to a statement from MPA anti-piracy chief Jan van Voorn, the new site operating from PrimeWire.tf is “largely identical” to previous incarnations of PrimeWire and on March 8, 2022, did carry at least some infringing content. However, tests carried out on March 9 revealed that the usual links to pirated content had been removed.

The submission to the court goes on to suggest that “[T]he removal of certain links to unauthorized streams does not necessarily mean that streams of that nature are not currently available through primewire.tf.” To support that notion, the MPA highlights two buttons labeled ‘Watch Now’ and ‘Download’ on the PrimeWire site that lead to another site that requires credit card information for access.

The MPA provides no evidence to say it checked for infringing content but it’s pretty clear that the buttons actually lead to a highly questionable, affiliate-scheme-driven, third-party-operated, subscription-trap type platform. Links to these sites appear on many pirate platforms and for those who choose to sign up for them, only disappointment and regret lie ahead. Not least since they rarely offer the content they promise.

Nevertheless, the MPA has stronger claims elsewhere, including the fact that PrimeWire is still operating its ‘Submit a link’ system which gathers the links to content that later appear in PrimeWire’s indexes. Those links aren’t being displayed right now but under the law, that doesn’t necessarily matter.

As the MPA rightly points out, the removal of infringing links could be a ploy to undermine its request for a permanent injunction. Logic says that if there are no links, there’s also no infringement, but that’s not how things work.

The US Supreme Court previously stated that when a defendant voluntarily ceases illegal activity, it is the defendant that faces the “formidable burden” of showing that the same type of illegal activity won’t reoccur.

In this case, PrimeWire’s operators are choosing not to appear in court, so that’s arguably the worst possible base for someone trying to convince the court of anything. Secondly, the MPA feels that the evasive action taken thus far (new domains etc) is a sign of bad faith, which includes an announcement from PrimeWire that the site “will continue to operate as normal” after the domain switch.

“Defendants do not merit the benefit of any doubt. If Defendants actually intend to keep links to Plaintiffs’ Copyrighted Works off of their newest PrimeWire Website, Defendants can appear, make a showing, and seek relief from this Court,” the MPA informs the court.

“That is not their intent. Defendants have tried similar tactics of switching domains when their websites have been blocked in other countries. All evidence indicates they will do the same thing here if the www.primewire.tf domain is not included in the injunction. Defendants will be able to restore the links as quickly as they took them down.”

In closing, the MPA proposes an amended permanent injunction that covers the same ground as before but with the inclusion of primewire.tf. It basically prevents PrimeWire from infringing the studios’ rights in any way moving forward and includes a proposed order that would require PrimeWire to hand over all of its domains to the plaintiffs.

If PrimeWire fails to hand them over, the MPA wants the court to order the associated domain registrars (and if necessary, registries) to transfer them to the studios or disable them until they expire.