Proof That Using a VPN Keeps Piracy Lawsuits and ‘Strikes’ Away

Since the ISPs are legally obliged to pass these notices on to the supposed infringers, companies that try to turn piracy into profit see this as a business opportunity.

One such outfit, US-based Rightscorp, sends out DMCA notices but tags settlement offers onto the end, thus managing to request cash from an individual whose identity they do not know. While this helpfully circumvents the need to obtain a court order, as reported yesterday Comcast has been stripping the settlement offers away.

Another way people avoid these kinds of demands is by using an anonymizing service such as a no-logging VPN service, such as those listed here. When these companies receive Rightscorp-style notices there is nothing they can do with them, since they do not know the identity of the user in question.

While VPNs work in theory, up until now there has been little public proof that these services really do stop anti-piracy outfits in their tracks. However, thanks to DMCA notices submitted to Chilling Effects by Proxy.sh, we now have evidence that users are avoiding expensive copyright settlements by using a VPN. 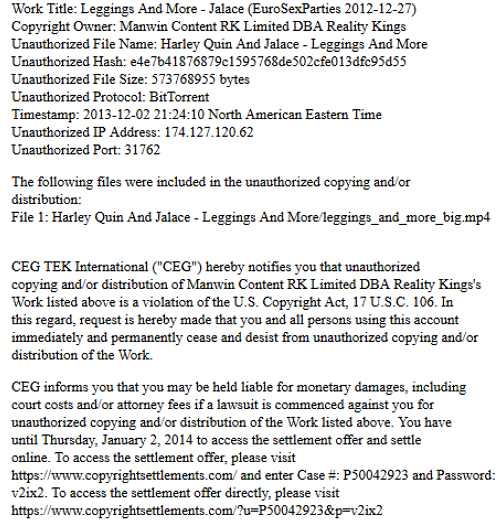 After following the links and entering the username and passwords detailed above, a TorrentFreak reader sent us the following screenshots of the settlement offer itself. 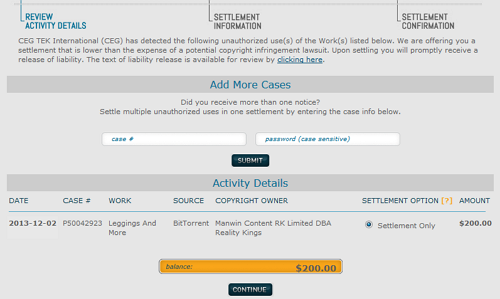 At this point the user is given the opportunity to enter more infringement notice details if they have them, with each adding to the total settlement amount. Once completed and following a click of the ‘continue’ button, a new page appears asking the alleged infringer to enter his personal details and select a payment method.

Also of interest are several other notices sent by HBO, Viacom, Warner Bros. and NBC Universal to VPN users. While none of these ask for cash payment, these companies are partners in the ‘six strikes‘ campaign currently underway in the United States. If the individuals targeted by these notices had been using one of the participating ISPs, they would have had a ‘strike’ placed against their account.

Since they were using a no-logging VPN, the notices dropped into a black hole.