Hardly a week goes by without the Russian web-blocking juggernaut rolling on to new targets. Whether they’re pirate websites, anonymity and proxy services, or sites that the government feels are inappropriate, web blocks are now a regular occurance in the region.

With thousands of domains and IP addresses blocked, the situation is serious. Just recently, however, blocks have been more problematic than usual. Telecoms watchdog Roskomnadzor, which oversees blocking, claims that innocent services are rarely hit. But critics say that overbroad IP address blockades are affecting the innocent.

Earlier this month there were reports that citizens across the country couldn’t access some of the country’s largest sites, including Google.ru, Yandex.ru, local Facebook variant vKontakte, and even the Telegram messaging app.

There have been various explanations for the problems, but the situation with Google appears to have stemmed from a redirect to an unauthorized gambling site. The problem was later resolved, and Google was removed from the register of banned sites, but critics say it should never have been included in the first place.

These and other developments have proven too much for some pro-freedom activists. This week they traveled to Roskomnadzor’s headquarters in St. Petersburg to give the blocking watchdog a small taste of its own medicine.

Activists from the “Open Russia” and “Civil Petersburg” movements positioned themselves outside the entrance to the telecom watchdog’s offices and built up their own barricade constructed from boxes. Each carried a label with the text “Blocked Citizens of Russia.”

Blockading the blockaders in Russia 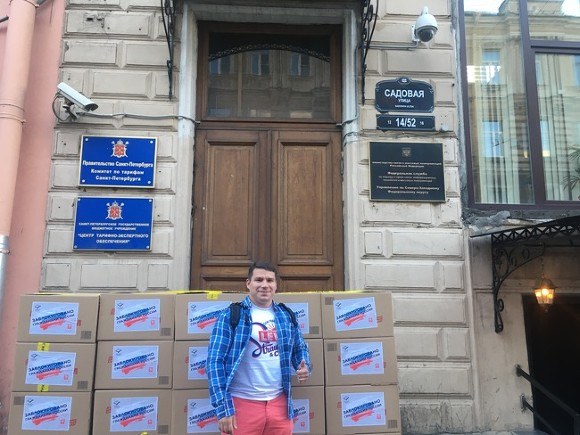 “Freedom of information, like freedom of expression, are the basic values of our society. Those who try to attack them, must themselves be ‘blocked’ from society,” said Open Russia coordinator Andrei Pivovarov.

Rather like Internet blockades, the image above shows Open Russia’s blockade only partially doing its job by covering just three-quarters of Roskomnadzor’s entrance.

Whether that was deliberate or not is unknown but the video embedded below clearly shows staff walking around its perimeter. The protestors were probably just being considerate, but there are suggestions that staff might have been using VPNs or Tor.

Moving forward, new advice from Roskomnadzor to ISPs is that they should think beyond IP address and domain name blocking and consider using Deep Packet Inspection. This would help ensure blocks are carried out more accurately, the watchdog says.

There’s even a suggestion that rather than doing their own website filtering, Internet service providers could buy a “ready cleaned” Internet feed from an approved supplier instead. This would remove the need for additional filtering at their end, it’s argued, but it sounds like more problems waiting to happen.