Despite only being online for a few years, much of Putlocker’s existence as a file-storage site has been tarnished by accusations from Hollywood.

Back in 2011 the MPAA categorized Putlocker as a “rogue site”, operations that amount to a “direct threat to our community and the millions of hard-working Americans that rely on it for their livelihoods.”

Hollywood’s problem with Putlocker is that its users regularly upload movies and TV shows to the service without permission. Links to these videos are then posted on third-party streaming portals, enabling visitors to watch the latest blockbusters for free. Putlocker has always insisted that it’s complied with the letter of the law and by 2012 it was fighting back.

“Putlocker takes a strong stand against copyright infringement and in the past year and a half we have taken down hundreds of thousands of infringing files and blocked the accounts of hundreds of repeat offenders,” the site told TF at the time.

Despite the public statements and apparent copyright takedowns, Hollywood’s position on the site has remained unchanged. Up to and including their latest submission to the USTR, the MPAA has continued to insist that Putlocker is a “notorious market.”

Earlier this week, however, and in parallel with Hollywood’s latest accusations, Putlocker simply disappeared. Visitors to the domain were redirected to a completely new site with a brand new name – Firedrive.com. What followed was a steady stream of emails to TorrentFreak asking if we could shine any light on developments. Here are our findings.

“Putlocker has been under active redevelopment for over a year under a new management and development team. It was decided to rebrand the site, in order to get a fresh start,” the Firedrive team told TF.

The new site certainly looks fresh, with a brand new design that makes it look more like a competitor to the revamped Mediafire than some kind of alleged pirate hangout. Firedrive offers 50GB of free storage for everyone, with files accessible on any device along with features to share files as privately or as publicly as the user might like. 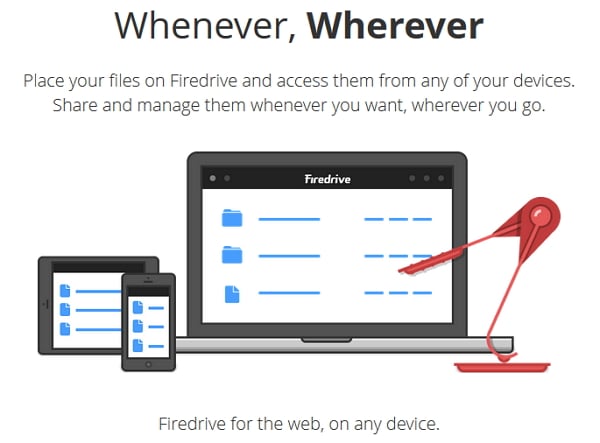 “Firedrive has all the features of Putlocker like free unrestricted access to files, streaming of media files, and mobile access, but that’s just the start. Firedrive has a wide array of new features that really make it a unique product. These include groups, public profiles, filedrops, advanced file permissions, document viewing, and much more,” Firedrive explains.

While Firedrive is clearly looking towards a fresh start, former users of Putlocker will be pleased to know that their data has been fully shipped over to the new site.

Other features to make FireDrive even more accessible are currently in the works, including desktop and mobile applications, syncing across devices, and end-to-end encryption.

The additions are likely to please users, but whether the changes will be enough to improve the site’s image with Hollywood remains to be seen.